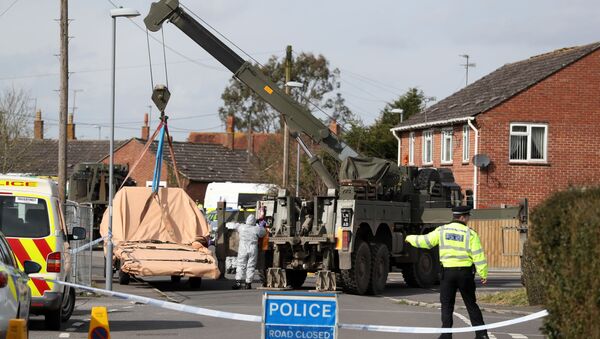 MOSCOW (Sputnik) - Investigators from the Organisation for the Prohibition of Chemical Weapons (OPCW) have arrived at the scene in the UK city of Salisbury where former Russian spy Sergei Skripal was poisoned earlier this month, according to The Independent newspaper.

The investigative team visited Mill pub, where Skripal and his daughter had gone before the incident, according to media reports.

Sergei Skripal and his daughter Yulia were found unconscious earlier in March on a bench at a shopping center in Salisbury. Both of them remain in critical condition. UK Prime Minister Theresa May has stated that it was "highly likely" that Russia was responsible for the incident. She later went on to announce a package of anti-Russia measures, including the expulsion of Russian diplomats from the country, and the suspension of bilateral contacts between London and Moscow.

The Russian Foreign Ministry has refuted all the allegations and requested the UK Foreign Office to allow a joint investigation into the case. On Saturday, Russia announced retaliatory measures against the United Kingdom, declaring 23 employees of the UK Embassy in Moscow personae non gratae.

On March 14, the UK envoy to the UN Security Council announced that the United Kingdom had asked the OPCW to independently verify its findings in the nerve agent attack against Skripal. On Monday, the OPCW experts arrived in the United Kingdom for the investigation.

Most recently, Vladimir Ermakov, head of the non-proliferation and arms control department at the Russian Defense Ministry, said that "either the British authorities are unable to protect from a terrorist attack on their territory or staged the attack themselves."

He also said that Moscow believes the statements by Paris about solidarity with London in the assessment of attack on Skripal are ridiculous as France does not possess any concrete data on the case.

The attack on the Skripals is a "gross folly," which is not beneficial to Russia, he added.