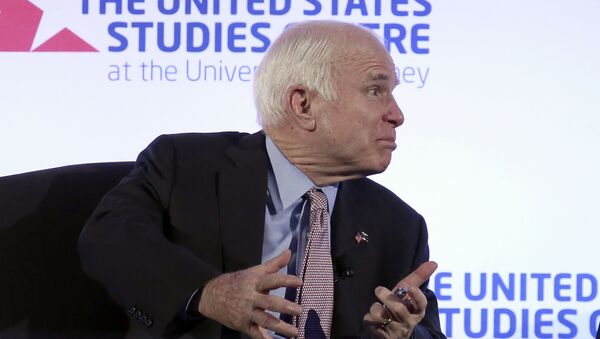 US Senator John McCain has lambasted Donald Trump over his phone conversation with Vladimir Putin, in which the US president congratulated his Russian counterpart following his election win.

81-year-old Senator John McCain said that "an American president does not lead the Free World by congratulating dictators on winning sham elections."

"And by doing so with Vladimir Putin, President Trump insulted every Russian citizen who was denied the right to vote in a free and fair election to determine their country's future," McCain added.

However, Twitter users were quick to react to McCain's verbal attack against Trump, with some urging the senator "to lean respect" and consider resigning.

The war monger is at it again.
Go away John McCain. Let @potus engage is civil talks FOR PEACE!!
We all have had enough of your damn wars McCain.
CONGRATS!!!! @KremlinRussia_E

Says the guy who met with the “rebels.”

Senator McCain needs to resigned. He is a shadow of his former self and an embarrassment to Arizona and the US.

The more evil or despicable a person is the better his/her chances of making it to the top of the economic or political ladder in the US.

Says the man who picked a holy roller nut job as a running mate, and from the opportunity to put an end to our insanity, poured gas on the fire that ended with Trump. https://t.co/qlf4z3kHgN

McCain's remarks came after media reports said that in a telephone conversation on Tuesday, US President Donald Trump congratulated Vladimir Putin on his win in the March 18 presidential elections in Russia.

Additionally, the two discussed an array of pressing international issues, including North Korea, Syria, Ukraine and the development of Russian-US relations.

According to the Washington Post newspaper, citing officials familiar with the situation, Trump has ignored the specific warnings of his security advisers to avoid congratulating Putin on his victory in Sunday's election. Trump’s briefing materials read "DO NOT CONGRATULATE," the US officials told the WP, referring to the call between the two leaders.

Moreover, the US president opted not to condemn Russia’s alleged involvement in the case of ex-spy Sergei Skripal's poisoning during the Putin call despite the contrary recommendations of his team, according to the newspaper. Moscow has denounced the claims of alleged Russia's involvement in the case, with Putin calling the allegations "nonsense."

"We are ready to cooperate, we immediately said this, we are ready to take part in the necessary investigations, but for this we need to have an interest on the other side, we do not see it yet," Putin said on Sunday.