In a statement on March 19, the political affiliate of the Syrian Democratic Forces (SDF) declared that "our people will not allow [Turkish President Recep Tayyip] Erdogan to implement his plan to dominate over northern Syria," according to media reports.

"We assert that the Syrian people will not hesitate to resist the Turkish aggression," the statement underscored.

It recalled that "an unequal battle" in Afrin between the SDF's Kurdish detachments and "Turkish aggressors" had continued for almost two months. 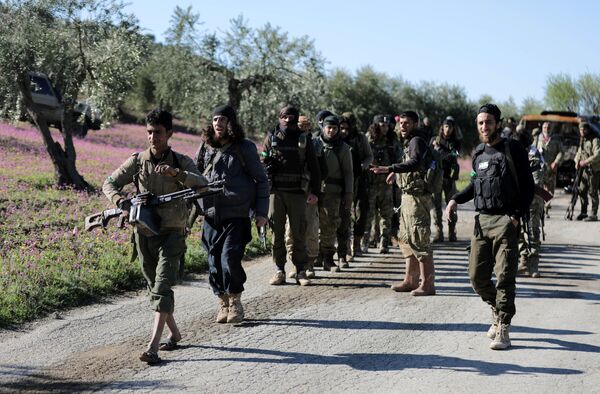 "The SDF leadership decided to evacuate half a million Afrin residents, who could be subjected to violence by terrorists and mercenaries fighting on the side of the Turkish army," according to the statement.

The SDF has also pledged to do away with "Afrin's occupation so that civilians can return there."

The statement came a day after President Erdogan claimed that the Turkish forces and the Free Syrian Army, an opposition group, had seized control of the de facto self-governing Kurdish enclave of Afrin in northern Syria's Aleppo Governorate.

Syria, for its part, reiterated its stance by describing Turkey's establishment of control over Afrin as a "criminal act" which Damascus said runs counter to the UN Charter and international law, according to Syrian Arab News Agency (SANA).

Turkey Opened Border for Terrorists to Enter Syria - Syria's Envoy to UN
Turkey launched its Operation Olive Branch on January 20 in a bid to "clear" its Syrian border from fighters Ankara describes as terrorists.

The operation was harshly condemned by Damascus, which slammed it as a "violation of the country's sovereignty." Moscow, in turn, urged the parties to the conflict to respect Syria's integrity.

The Kurdish People's Protection Units (YPG) militia, linked to the SDF and the Kurdistan Workers' Party (PKK), is blacklisted by Ankara as a terrorist organization.