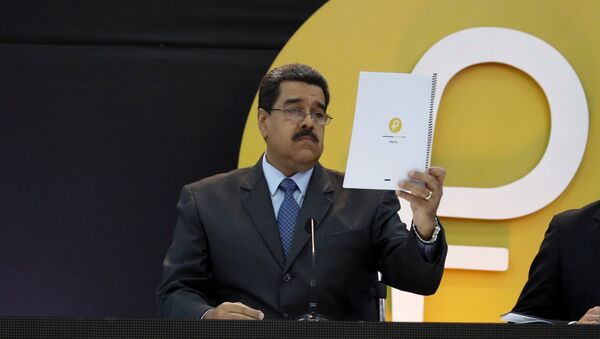 The Venezuelan government launched a new state-backed cryptocurrency to attract investors to the country, which is suffering from a major economic crisis. The country’s problems have forced its people to take to the streets, leading to multiple clashes with police. This has led to accusations of human rights violations, sanctions against Venezuela.

US President Donald Trump is planning on banning financial operations involving Venezuela's new oil-backed cryptocurrency the "Petro," reports McClatchy, a DC-based news agency. According to the agency, the measure is to be expected at the beginning of next week, March 19, and it will probably be part of a larger set of sanctions against the Venezuelan government.

The President of Venezuela Nicolas Maduro announced the launch of the new cryptocurrency back in February 2018. According to him, its value is backed by the country's crude oil reserves. The move is believed to be an attempt to draw new financial flows into the country, though some financial experts still express skepticism over the new digital currency.

Venezuela's economy took a serious nosedive in 2017, which led to hyperinflation and food and medical supply shortages in the country. The dire economic situation has resulted in multiple clashes between protesters demanding ousting of the acting president and the riot police, which were condemned by several countries, including the US, as human rights violations. The US subsequently decided to impose economic sanctions against key figures in Maduro's government.