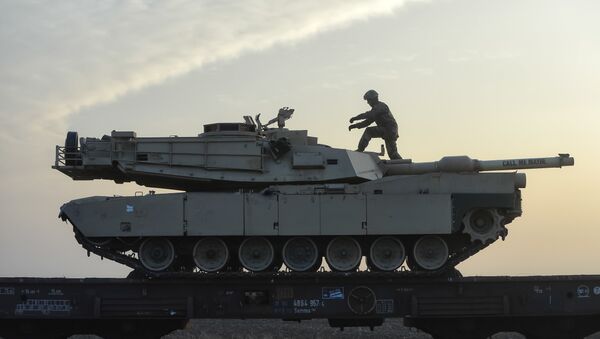 "In terms of rotational versus permanent, I do believe we need more forces in Europe, I don’t think we are at the posture that I believe appropriate or required yet," Scaparrotti said. "And because of that, I think that there are some permanent forces that I would like to have."

The General pointed out that the United States sees that Russia is continuing its activities in eastern Ukraine after the sale of Javelin anti-tank missiles to Ukraine.

"The assets that we provided funded by Congress to support them and support their development have provided them with defensive capabilities and the Javalins that you specifically noted. Those assets go directly to improve their capability, to establish their defense in the east and become more and more confident in their ability to secure their nation," Scaparrotti said.

NATO Doesn't Want New Cold War, Arms Race With Russia - Stoltenberg
"What I've seen in Russia is Russia has continued to support what I call a proxy force … I think it's too early to say whether or not we've seen changes, a direct result of decisions that we are just taking, but we'll watch that closely."

Scaparotti also cited the level of activity of the Russian navy, including the use of submarines, which, according to him, reached the level of the 1980s. He noted that Russia was actively modernizing its navy forces.

"Although we maintain our dominant position under the water, given Russia's modernization and the growing activity of its forces, we must invest more in maintaining our leadership," the general said.

Scaparrotti's statement comes amid a press release issued by the US Air Force, which reads that the US sent F-15 fighter jets and 260 airmen to the Netherlands to support Operation Atlantic Resolve, which is an initiative aimed at countering Russia.

NATO's Eastwards Expansion: The West's Original Sin
The aircraft will deploy to multiple locations to participate in exercises and training with allies in the region, the release said.

Some of the airmen will lead training missions in the Netherlands, UK and Bulgaria, and others will take part in a Netherlands Air Force exercise called Frisian Flag, the release added.

Since 2014, the United States has been boosting its military presence in Europe, particularly as part of NATO, while using the Ukrainian crisis as a pretext for the deployment of additional hardware near Russia's borders, with Moscow calling the actions provocative and warning that they could lead to regional and global destabilization.

According to Foreign Minister Sergei Lavrov, NATO has recognized that Russia had never planned to attack any of the alliance's members, but used the pretext of the alleged Russian "threat" to deploy more equipment and troops next to Russian borders.