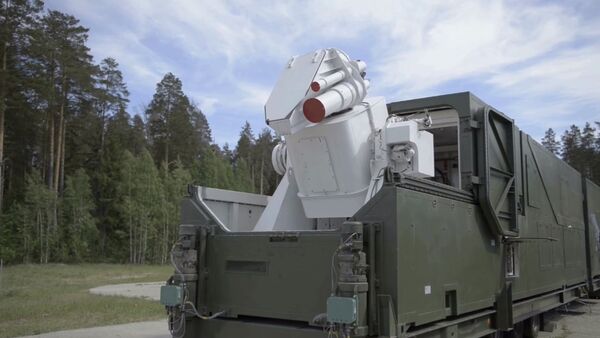 © Photo : YouTube/Russian Defence Ministry
Subscribe
During his address to the Federal Assembly, President Vladimir Putin shocked observers when he said that Russia's progress in laser weaponry was "not just a concept or a plan," and that the army was already being equipped with combat lasers. But what are these weapons actually for? Veteran military analyst Viktor Murakhovsky may have the answer.

President Putin Reveals Two Cases When Russia Can Use Nuclear Weapons
Murakhovsky noted that he could not rule out that the source of energy for the laser's pulse may come from a portable nuclear power plant.

Russian Engineers Finish Work on Laser Capable of Shooting Down Enemy Satellites
Along with the combat laser, Putin also showed off a series of other new, breakthrough weapons, including the Sarmat intercontinental ballistic missile, the Avangard hypersonic strategic missile, an ultra-long-range underwater drone platform, and more.

Improvement of the Russian Armed Forces
© Sputnik
000000
Popular comments
Laser canons are here to stay. It's just a matter of time before someone uses one in combat. The U.S. is putting them on ships, planes, tanks, trucks, etc. They will be very useful against drones, cruise missiles, and anti-aircraft missiles. They are much cheaper than other defensive missiles. They will be of limited to no use against reentry vehicles designed to withstand the heat of atmospheric reentry. There is a limit to how many targets a laser can engage in a short period of time, so laser-based defenses would still be vulnerable to saturation attacks.
Cooler Heads
5 March 2018, 20:48 GMT1
000000
Cooler Heads, Nothing is perfect but could help a lot ..
fgazda1947
6 March 2018, 05:52 GMT1
000000
Newsfeed
0
New firstOld first
loader
LIVE
Заголовок открываемого материала
Access to the chat has been blocked for violating the rules . You will be able to participate again through:∞. If you do not agree with the blocking, please use the feedback form
The discussion is closed. You can participate in the discussion within 24 hours after the publication of the article.
To participate in the discussion
log in or register
loader
Chats
Заголовок открываемого материала
Worldwide
InternationalEnglishEnglishMundoEspañolSpanish
Europe
DeutschlandDeutschGermanFranceFrançaisFrenchΕλλάδαΕλληνικάGreekItaliaItalianoItalianČeská republikaČeštinaCzechPolskaPolskiPolishСрбиjаСрпскиSerbianLatvijaLatviešuLatvianLietuvaLietuviųLithuanianMoldovaMoldoveneascăMoldavianБеларусьБеларускiBelarusian
Transcaucasia
ԱրմենիաՀայերենArmenianАҧсныАҧсышәалаAbkhazХуссар ИрыстонИронауОssetianსაქართველოქართულიGeorgianAzərbaycanАzərbaycancaAzerbaijani
Middle East
Sputnik عربيArabicArabicTürkiyeTürkçeTurkishSputnik ایرانPersianPersianSputnik افغانستانDariDari
Central Asia
ҚазақстанҚазақ тіліKazakhКыргызстанКыргызчаKyrgyzOʻzbekistonЎзбекчаUzbekТоҷикистонТоҷикӣTajik
East & Southeast Asia
Việt NamTiếng ViệtVietnamese日本日本語Japanese中国中文Chinese
South America
BrasilPortuguêsPortuguese
NewsfeedBreaking
05:42 GMTFrance Snubs BoJo Offer of Joint Calais Patrols, Tells UK to Focus on ‘Legal Immigration Paths’
05:31 GMTCOVID-19 Live Updates: Malaysia Detects First Case of Omicron Variant
05:29 GMTISS to Perform Avoidance Maneuver Against Space Debris on Friday
05:23 GMT37 Years After Bhopal Gas Tragedy, New Series ‘The Railway Men’ to Pay Tribute to the Unsung Heroes
05:23 GMTAmerica's Epidemic: The US’s Massive Mass Shooting Problem
04:10 GMTUS Midterms 2022: Democrats Fear Congressional Shakeup as 19 House Dems Will Not Seek Reelection
04:04 GMT'I Knows It's Not Me': Alec Baldwin Says He's Not to Blame for Fatal 'Rust' Shooting
02:17 GMTThe Harris Shuffle
01:26 GMTUS Government Actions Urgently Needed to Better Protect Critical Infrastructure - Report
00:52 GMTIranian Scientists Recruited by Israel’s Mossad Behind Explosions at Natanz Nuclear Plant - Report
YesterdayUS, EU Diplomats Emphasize Need to Cooperate With China Where Possible - Joint Statement
YesterdayUS Signs $415Mln Deals With 3 Companies to Design Commercial Space Stations - NASA
YesterdayBiden Admin Finalizes Plan to Reinstate Trump-Era 'Remain in Mexico' Policy at Southern Border
YesterdayManchester United's Michael Carrick Steps Down as First Team Coach
YesterdayUS Congress Passes Spending Bill to Stave Off Government Shutdown, Measure Heads to Biden
YesterdayWall Street Rebounds as Heat Fades on Omicron, Dow Jones Up Almost 2%
YesterdayFTC Sues to Block $40 Billon Merger of US Chipmaker Nvidia With UK’s Arm Ltd
YesterdayCristiano Ronaldo Scores 800th Goal for Club and Country
YesterdayGunman at UN Headquarters Not Terrorist Threat, Came to Deliver Documents - Police
YesterdayRussian Prosecutors Launch Probe Into Whelan's Complaints of Prison Corruption - Brother