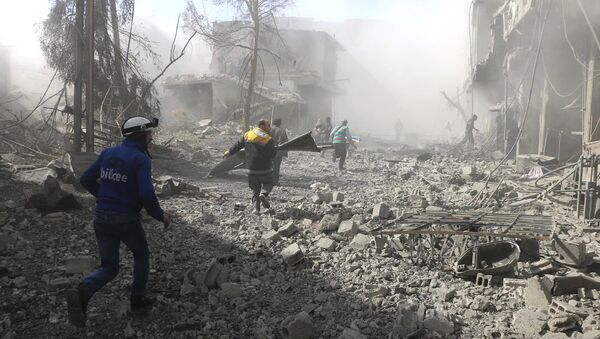 The terrorists, who are currently holding the area of East Ghouta, continue to shell the Syrian capital paying no attention to the precision of their attacks, a local resident told Sputnik.

"The school is being shelled daily, in these conditions; it is very difficult to study. We are afraid for our students and teachers. National security forces helped us to barricade the doors and some windows with sandbags to reduce the risk of someone being wounded by a [rocket] fragment or a bullet," the school principal in the Dahiyat al-Assad district, named Lawrence Haddad told Sputnik.

According to her, dozens of school teachers and pupils were killed as a result of the shelling.

"For this reason, some parents do not let their children go to school. Terrorists are not interested in the accuracy of the hit, they do not care who dies: adults, children, civilians or military. It is important for them to create newsworthy information and put pressure on the army, so that it stops its offensive against terrorists in East Ghouta," Haddad explained.

Despite the announced humanitarian pause in East Ghouta, the situation in the area remains extremely tense: terrorists have trapped civilians, shelling everyone who is trying to reach the humanitarian corridors.

Describing the strained situation on the ground on Wednesday during talks with Austrian Chancellor Sebastian Kurz, Russian President Vladimir Putin stated that terrorists in Eastern Ghouta shell Damascus around 50-80 times a day, including the area of Russia's embassy and pointed out that Russia would not tolerate this forever.

The shelling, which cause civilian casualties, is taking place even after the UNSC resolution calling for a ceasefire regime throughout Syria for a period of 30 days.

The unanimously adopted resolution came nearly two weeks after the escalation of the situation in Eastern Ghouta, following the launch of a military operation by Syrian government forces in a bid to clear the region of militants.