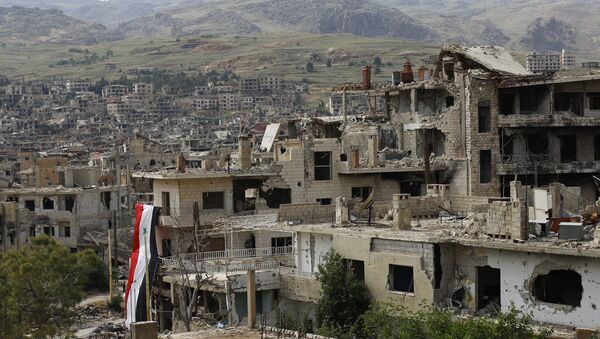 MOSCOW (Sputnik) - Companies from the countries that supported extremists during the Syrian conflict will not be allowed to take part in the economic projects to reconstruct the war-ravaged country, Syrian Ambassador in Moscow Riyad Haddad said on Monday.

"All those who fought along with us, who supported [Syria in the fight against extremists], have the right to participate in the economy's restoration except for the countries, which supported terrorists," Haddad told journalists on the sidelines of the Russian-Syrian business forum in the Russian Chamber of Commerce and Industry.

READ MORE: US 'Forced Turkey to Take Measures' in Syria by Ignoring Its Concerns – Expert

Haddad indicated that Syria above all welcomed the support of the Chinese, Iranian and Russian companies, adding that the exact amount of assistance remained unknown.

Syria Starts Mass Rebuilding of Schools Destroyed by Militants
"There is no exact statistics on the scope of the damage caused by the war, but we can state that it is really enormous, that is why, I believe, we are interested in almost any assistance that would help to restore our economy," the ambassador stressed.

Haddad added that the Russian companies that were willing to take part in the post-war reconstruction of Syria would receive maximum benefits for their operation in the country.

"The Syrian government and all the relevant bodies have received the necessary instructions from our president Bashar Assad so that our Russian colleagues that will take part in the Syrian economic recovery can receive maximum advantages in order to return our country to the position that it used to hold before the war," Haddad pointed out, highlighting that the Syrian embassy was ready to cooperate with Russian partners and provide various advantages to them.

The Syrian ambassador added that a special supervisory bureau for the economic projects for the country's rehabilitation had been established under the Syrian government.

Dozens Civilians Killed in Coalition’s Strikes in Syria's Deir ez-Zor - Reports
Syria has been engulfed in a civil war since 2011, with government forces fighting numerous opposition factions and terrorist groups. The international community has taken a number of steps aimed at settling the crisis, including through negotiations in Geneva, Astana and Sochi.

Moscow has been assisting Damascus both through supporting the struggle against the terrorist groups and by providing humanitarian aid to the residents of the crisis-torn country.