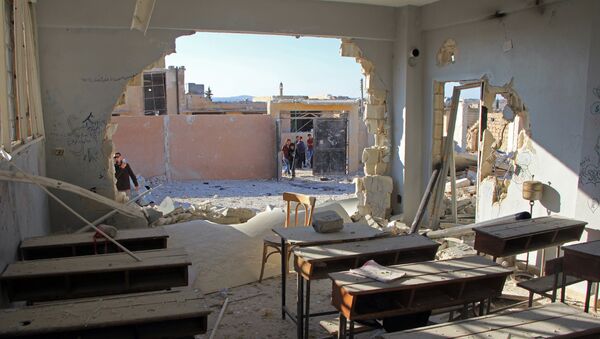 HASNU (SYRIA) (Sputnik) - A mass rebuilding of schools destroyed by terrorists during the war is ongoing in Syria, with a school in the village of Hasnu close to Western Ghouta reopening its doors to students after the reconstruction.

"For three years in row [the school] served as headquarters of the militants. Can you imagine in what condition they left it? We had to clear the debris for several days before starting the reconstruction," Rabi Azal, the school's director, said.

Militants in Syria often occupy schools, as usually these are separate buildings with their own large fenced territory, which makes it convenient to hold the line.

FBI Probing Suspected Daesh Hacks of 800 School Websites in US - Clarion Project
"When terrorists were there [at the school] I was really worried about it. I had one thought on my mind: if only it was not destroyed completely. Fortunately, this did not occur and militants left. Yes, there are a lot of challenges, we do not have enough teachers, manuals, however, we manage to cope with this," primary school teacher Fatima Muslima noted.

As many children were unable to attend classes because of the war, they fell behind in the education programs.

"Some [children] not only do not know how to read, they do not even know letters! Due to the war children have missed a lot. There are teenagers aged 12-13, who are still in the third grade," Fatima Kenan, a primary school teacher, stated.

The Syrian leadership is currently exerting every effort to resume the educational process across the country. In the majority of schools, the learning and repairing processes are simultaneous.

Syria has been in state of civil war for over six years, with government forces fighting against both Syrian opposition groups and terrorist organizations.

Russian servicemen of the Russian Center for Syrian reconciliation are taking an active part in the restoration of infrastructure in Syria. In mid-January, the largest school in Deir ez-Zor suburban areas in the village of Hatla was reopened with the help of Russian officers.