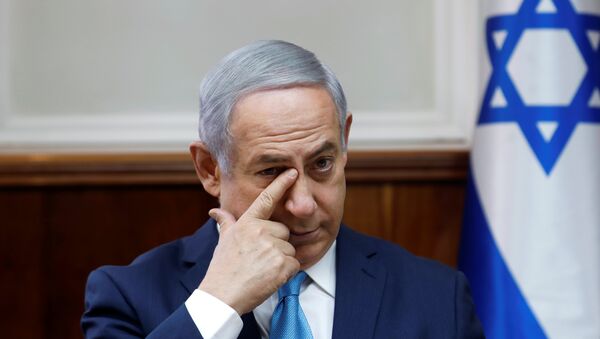 Mandelblit stressed that although it was unpleasant to indict any government minister, if he had to do it, he would bring Netanyahu to trial "without hesitation."

Speaking at a conference at Tel Aviv University, the attorney-general said that he knew Netanyahu well, but Mandelblit's decision was made on a purely professional level.

Mandelblit's speach comes after police recommended that the Israeli Prime Minister should be indicted this week on bribery and breach of trust charges in two corruption scandals, the investigation into which started over a year ago. Now the attorney-general will have to review the police material before deciding whether to file charges.

'Bibi Go Home!': Thousands Protest Against Netanyahu Government Corruption
Mandelblit praised the work done by the police, noting that "the investigations were carried out by the book, exactly as is expected by law enforcement authorities dealing with cases like these: professionally, thoroughly, creatively and with sophistication, with the aim of getting to the truth."

The police probe provoked a barrage of criticism from Netanyahu's supporters, who insisted that the police were orchestrating a coup d'etat in Israel. The Prime Minister denied the allegations of graft, calling them "biased" and "aggressive."

Bibi Corruption Case Continues: Police Ready to Charge Netanyahu With Bribery
Netanyahu was accused of receiving nearly $300,000 in gifts from Hollywood tycoon Arnon Milchan and Australian billionaire James Packer. According to the police, they might have benefitted from Netanyahu’s assistance in obtaining a US visa, advancing a free-trade zone adjacent to the Jordanian border or by receiving shares of a local television news channel.

In the second case, Netanyahu arranged to obtain favorable coverage from the popular broadsheet newspaper Yedioth Ahronoth in return for creating problems for its rival, Israel Hayum.

The Israeli Prime Minister slammed the police probe against him, saying it was "like Swiss cheese": full of holes, emphasizing that the truth would eventually come out.