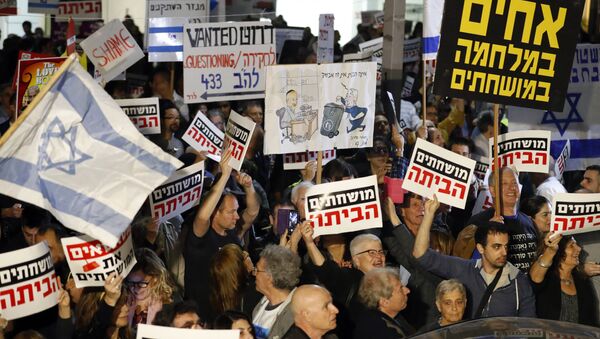 Netanyahu has been questioned by police seven times as part of an ongoing corruption investigation against him. He is suspected of receiving expensive gifts from business circles and attempting to reach a deal violating freedom of speech in the country.

More than 2,000 took to the streets of Tel Aviv on Saturday night, protesting against the Israeli government and corruption, chanting "Bibi, go home," "shame," "corrupt officials, go home," "not left, not right, but honest." The principal portion of protesters gathered again at the central Rothschild Boulevard of the city for the fifth week in a row as part of anti-government corruption rallies across the country.

The protests raging in Israel are in the wake of the ongoing investigation into Netanyahu allegedly receiving expensive gifts from business circles to advance their interests and trying to reach a deal with the leadership of the Yedioth Ahronoth newspaper, which reportedly agreed to cover the government's activities in a positive way  in exchange for adoption of a law that would limit activities of the Israel Hayom newspaper — the main competitor of Yedioth Ahronoth.

​Israel's Prime Minister Benjamin Netanyahu has been questioned seven times already, despite repeatedly denying any wrongdoing, explaining that he's the victim of a smear campaign created by his political opponents.

​Local media echoes the stance, saying that the probe has failed to gather enough evidence to bring formal bribery charges against him.

Additionally, Netanyahu may reportedly face charges over his alleged involvement in a multi-million dollar submarine deal with German shipbuilder ThyssenKrupp.