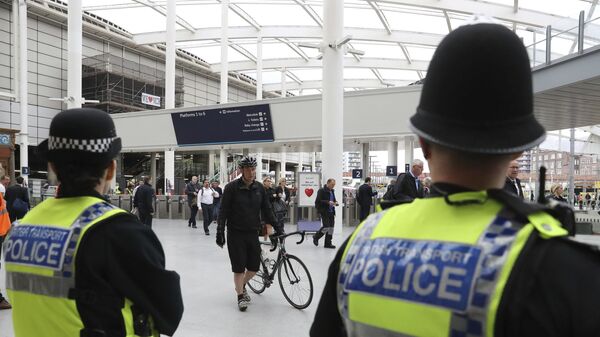 Panic hit the streets of Manchester on Tuesday morning as a man went on the rampage, attacking people at random. A woman's body was later found in an apartment. The incident is not believed to be related to terrorism at this point. Manchester was the scene of a suicide bombing last year which killed 22 people at an Ariana Grande concert.

Police have sealed off the center of Manchester after a man ran amok after jumping out of the window of a nearby apartment block, where a woman's body was discovered later.

The man, who was covered in blood, attacked people in cars during the morning rush hour in the Ancoats district of the city.

Manchester was targeted by a suicide bomber in May last year but this latest incident is not believed to be terrorist-related and it is thought the man may have been under the influence of drugs.

Police were alerted after a man was seen behaving "erratically" in Swan Street at 7.40am on Tuesday, February 13.

He is thought to have fallen from a window at the nearby Shush Apartments and then began attacking people and cars for no apparent reason.

The scene on Swan Street. A car with a badly damaged roof, with a number of officers at the scene. Police cordon in place. pic.twitter.com/ZUZRTFgwCm

'Pinned to the Ground' By Police

Witnesses said they saw the man "pinned to the ground by police officers, covered in blood."

A 37-year-old man has been arrested by Greater Manchester Police on suspicion of murder and several people who had been assaulted have been taken to hospital.

"We are currently working to establish the exact circumstances surrounding what has happened this morning and the woman's death. We are in the very early stages of our investigation and I would urge anyone with any information to get in touch," said Superintendent Chris Hill.

Detectives are said to be now questioning witnesses at the nearby Burton Arms pub.

Marshall Street — where a BMW has been badly damaged — is also cordoned off. pic.twitter.com/VMI0LY2jDR

Pictures on social media showed a Hyundai car and a BMW both with their windows smashed in.

A man told the Manchester Evening News his sister had been on her way to work at nearby Salford Royal Hospital when the man smashed the back window of her car.

"He tried to drag her from the car, she was screaming and trying to stop him. He was smearing blood everywhere. She is okay — just very traumatized," he said.

In May last year Manchester-born Salman Abedi blew himself up in the foyer of the Manchester Arena, killing 22 people and injuring 59. He had been to Libya and had become radicalized by Daesh online.