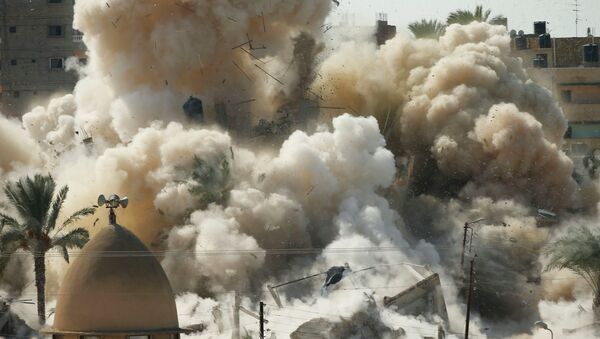 CAIRO (Sputnik) – The Egyptian military conducted a series of airstrikes on terrorists’ infrastructure including munitions and weapons hideouts in the northern and central parts of the Sinai Peninsula, the country’s army said in a statement on Saturday.

The country’s military personnel supported by the Interior Ministry also held raids in settlements on the Sinai Peninsula. The forces established road checkpoints for identifying criminals and preventing them from leaving the peninsula, the document added.

The army is patrolling border territories and Mediterranean coastal area, the statement continued.

Africa
Egypt’s Security Forces Kill 8 Extremists in Sinai Peninsula
The Egyptian army called on the country’s residents to cooperate with the law enforcement and report about terror suspects threatening stability and security of the country.

On Friday, Cairo started a major anti-terror operation in the area.

Cairo has been holding anti-terror activities on the Sinai Peninsula, where militants have repeatedly staged deadly attacks, for years. In 2014, the state of emergency has been introduced on the peninsula after militants attacked Egyptian security officers in the area.