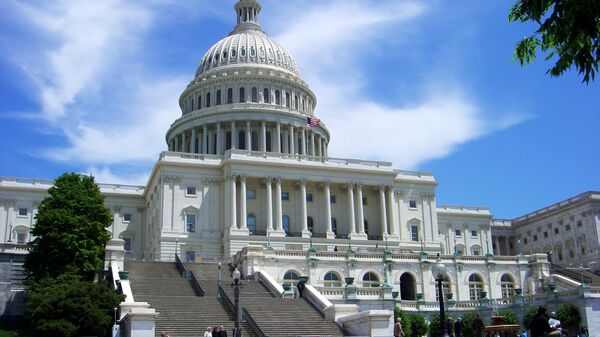 CC BY 2.0 / Kmccoy / United States Capitol
Subscribe
International
India
Africa
The new law that was approved by both chambers of the US Congress ends the brief federal government shutdown and removes spending caps for military and non-defense spending until 2019.

US President Donald Trump took to Twitter on Friday to announce that he has signed the spending bill into law. The move comes shortly after the US House of Representatives and the Senate passed the bill.

The US House passed the bill on Friday in a 240-186 vote. Prior to that 71 senators voted in favor of the bill and 28 opposed it, hours after the government shut down at midnight on Thursday when the budget funding expired.

Just signed Bill. Our Military will now be stronger than ever before. We love and need our Military and gave them everything — and more. First time this has happened in a long time. Also means JOBS, JOBS, JOBS!

Trump said in another twitter statement that the bill increased spending on items he did not want or like in order to get Democratic votes.

Costs on non-military lines will never come down if we do not elect more Republicans in the 2018 Election, and beyond. This Bill is a BIG VICTORY for our Military, but much waste in order to get Dem votes. Fortunately, DACA not included in this Bill, negotiations to start now!

'Risky Territory Here': US Gov't Shuts Down Again as Congress Misses Deadline
The legislation signed by Trump is a continuing resolution to keep the government funded for six more weeks, but it also raises sequestration budget caps for fiscal years 2018 and 2019 by $296 billion, suspends the debt ceiling until March 2019 and includes an additional $90 billion in disaster relief for California, Texas, Florida and Puerto Rico.

In January, US government agencies also ceased their operations because of delays in the adoption of a temporary bill on the financing of such institutions, however, the Congress adopted a budget for the period until February 8.