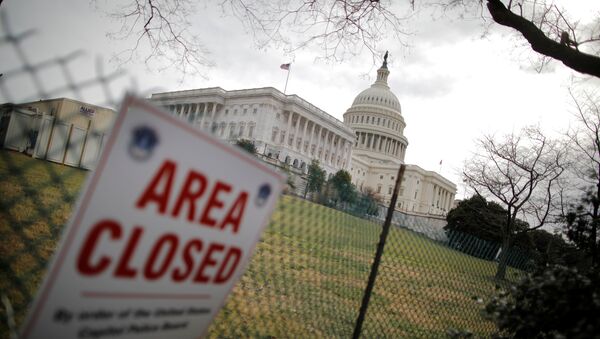 © REUTERS / Carlos Barria
Subscribe
International
India
Africa
The US government has shut down for a second time in weeks as Congress missed the deadline to pass a spending bill.

Federal financing for US government agencies ceased at midnight after Congress failed to pass a bipartisan budget deal that would have prevented this year’s second shutdown from happening.

"Unfortunately, the Congress has not taken action to pass a bill providing for continuing appropriations before midnight. Therefore, agencies should now execute plans for an orderly shutdown due to the absence of appropriations," the Office of Management and Budget at the Executive Office of the US President said in a statement issued on Thursday.

The prospects for avoiding the temporary shutdown were dashed when Republican Sen. Rand Paul demanded a vote on an amendment to the spending bill that would keep caps on federal spending, which is expected to rise by a total of $300 billion over two years.

Earlier, the White House told US government agencies to prepare for a shutdown after a budget deal ran into opposition. The federal government two-year funding bill was criticized earlier by Republican Sen. Rand Paul, who delayed the passage of the bill by calling a vote on an amendment he proposed to prove that the planned $300-billion hike violated the government's commitment to rein in federal spending.

US President Donald Trump has called for a federal government shutdown earlier. "If we have to shut it down because the Democrats do not want safety, and unrelated but still related, they do not want to take care of our military, then shut it down," the president said.

US Democrats’ Deal to End Shutdown Exposes ‘Incredibly Weak’ Party
However, White House said shortly after that the administration was not advocating for shutting down the government. Since the US government is in the shutdown mode, the majority of federal office buildings will be closed, while certain federal services will not be available.

The shutdown comes just over three weeks after the US government went into shutdown mode in January after the Senate has not manged to reach a deal on the institution's budget. The deal was derailed by Democrats, who insisted on the inclusion of immigration measures in the spending bill, to which the White House and Republicans were opposed.