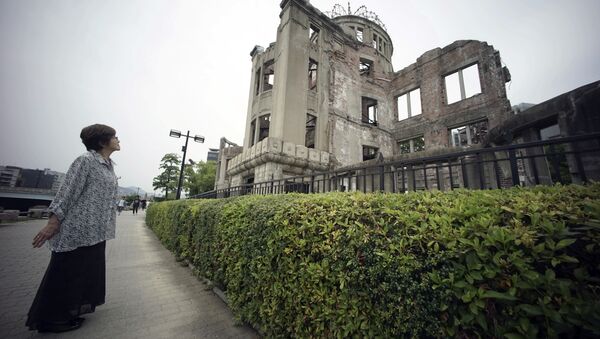 © AP Photo / Eugene Hoshiko
Subscribe
MOSCOW (Sputnik) – Frants Klintsevich, first deputy chairman of the Russian upper house's Committee on Defense and Security, believes that the 2018 US Nuclear Posture Review (NPR) allows for another mass murder of civilians with the use of nuclear weapons similar to the atomic bombings of Japan's Hiroshima and Nagasaki by the United States in 1945.

"The whole world remembers Hiroshima and Nagasaki. The US nuclear doctrine does not taboo the repetition of such things, and this is the most concerning thing," Klintsevich said in a statement on Saturday, as quoted by his press service.

The recently issued Nuclear Posture Review significantly boosts the confrontation aspect of the US foreign policy, basing its policies not on cooperation with Russia in this area, but on the rivalry with Moscow, the lawmaker pointed out.

By endorsing this nuclear doctrine, including multiple "ideological injections," the United States stakes on undermining global strategic balance for its own benefit, at the same time trying to depict Russia as the main reason for modernizing US nuclear forces, Klintsevich added.

Trump's Nuclear Posture Review: From US Nuke Capabilities to Nuclear Terrorism
The lawmaker noted that the United States had halted the strategic dialogue on nuclear risks with Russia using the Crimea referendum as a pretext, and had switched subsequently to groundless accusations against Moscow, as well as violations of various agreements.

The new US Nuclear Posture Review has become Washington’s reaction to the changing global environments, Klintsevich suggested. The situation on the Korean peninsula has shown that the United States cannot feel its full dominance even in the conflict with Pyongyang, the lawmaker pointed out.

Oleg Morozov, a member of the Russian upper house’s International Affairs Committee, called the US nuclear doctrine "demagogic" as on the one hand, the United States demonstrated peacefulness while accusing Russia of preparing for a nuclear strike, on the other hand.

The atomic bombings of Hiroshima and Nagasaki by the United States during the final stage of World War II remains the only use of nuclear weapons for warfare in history. The bombings left over 100,000 people killed and thousands of others injured.

After the end of the Cold War, the United States has seen a decrease in its weapons arsenal, particularly, due to the New START nuclear arms reduction treaty between Washington and Moscow. US President Donald Trump, however, has repeatedly vowed to build up the US nuclear arsenal.

000000
Popular comments
The world can only blame itself for the arrogance of the US,. The co-called Western Powers, along with Chian and Russia have appeased the US on too many occasions and this has allowed the US to become the world dictator. Instead of supporting NK in resisting US domination Russia and China has supported US sanctions. Instead of actively resisting the encirclement of Russia with US bases, Russia and appeased. Time is running out for both Chian and Russia. It is time for both Chian and Russia to actively establish more military bases and to start exerting more pressure on the US or accept US domination.
Nolapdog
3 February 2018, 16:47 GMT1
000000
Newsfeed
0
New firstOld first
loader
LIVE
Заголовок открываемого материала
Access to the chat has been blocked for violating the rules . You will be able to participate again through:∞. If you do not agree with the blocking, please use the feedback form
The discussion is closed. You can participate in the discussion within 24 hours after the publication of the article.
To participate in the discussion
log in or register
loader
Chats
Заголовок открываемого материала
Worldwide
InternationalEnglishEnglishMundoEspañolSpanish
Europe
DeutschlandDeutschGermanFranceFrançaisFrenchΕλλάδαΕλληνικάGreekItaliaItalianoItalianČeská republikaČeštinaCzechPolskaPolskiPolishСрбиjаСрпскиSerbianLatvijaLatviešuLatvianLietuvaLietuviųLithuanianMoldovaMoldoveneascăMoldavianБеларусьБеларускiBelarusian
Transcaucasia
ԱրմենիաՀայերենArmenianАҧсныАҧсышәалаAbkhazХуссар ИрыстонИронауОssetianსაქართველოქართულიGeorgianAzərbaycanАzərbaycancaAzerbaijani
Middle East
Sputnik عربيArabicArabicTürkiyeTürkçeTurkishSputnik ایرانPersianPersianSputnik افغانستانDariDari
Central Asia
ҚазақстанҚазақ тіліKazakhКыргызстанКыргызчаKyrgyzOʻzbekistonЎзбекчаUzbekТоҷикистонТоҷикӣTajik
East & Southeast Asia
Việt NamTiếng ViệtVietnamese日本日本語Japanese俄罗斯卫星通讯社中文（简体）Chinese (simplified)俄罗斯卫星通讯社中文（繁体）Chinese (traditional)
South America
BrasilPortuguêsPortuguese
NewsfeedBreaking
01:49 GMTDHS Looks to Staff Gitmo Migrant Facility With Guards Who Speak Haitian Creole Amid US Border Surge
01:30 GMTRussian Crew Leaves Boat Pilgrim in Alaska, Will Renew World Trip Next Spring - Captain
01:00 GMTWall Street Up Broadly as Fed Signals Caution With US Stimulus Taper, Rate Hike
00:45 GMT‘This Moment Demands Action’: Biden Eyes Executive Actions After Fruitless Police Reform Talks
00:26 GMTMoroccan Liberal Parties Form Coalition Government, Ousting Islamists After Decade of Rule
00:00 GMTIAEA Must Have Access to Nuclear Fuel for Australian Submarines - Iranian Envoy
YesterdayFDA Authorizes Pfizer Booster Shots for Elderly, At-Risk Americans
YesterdayTurkey Should Withdraw From Syria, End Occupation of Territories - Syrian Foreign Minister
YesterdayPentagon Says Aware of Reports of Poor Conditions at Military Base Housing Afghans
YesterdayUK Announces Plans to Become AI Innovation Superpower Within 10 Years
YesterdayUS Man Pleads Not Guilty to Capitol Bomb Threat After Livestreaming Police Standoff
YesterdayCroatian Police Partially Solve Mystery of Lone Woman Found on Island With No Memory
Yesterday‘Earth Looks Fragile from Space:’ Jeff Bezos Pledges $1 Billion to Tackle Climate Crisis
Yesterday‘World’s Coolest Dictator’: El Salvador’s Bukele Changes Branding on Twitter Amid Protests
YesterdayCzech, Hungarian Prime Ministers Slam EU for Poor Border Protection From Illegal Migrants
Yesterday‘We’re Done With Fear’: Florida Appoints Joseph Ladapo as State’s New Surgeon General
Yesterday'Difficult Decision': Facebook Chief Technology Officer to Step Down From Post
YesterdayGrandmothers Know Best: Cristiano Ronaldo’s Mother Believes Her Grandson is a Star in the Making
YesterdayStates to Provide Cash for Each COVID Death: Modi Gov't to Top Court
YesterdayLeaks Reveal UK Equalities Minister Dismissed Colonialism, Mocked Trans People