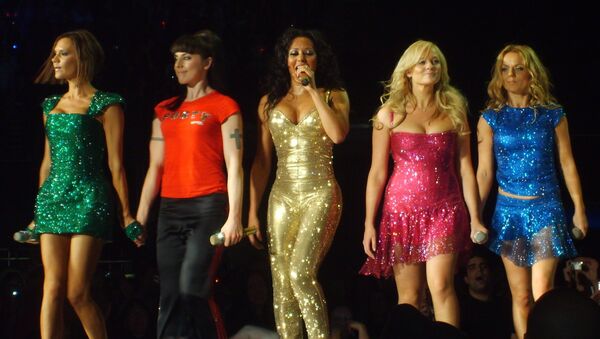 © Photo : Kura.kun
Subscribe
The world-renowned British pop band gathers together again – but not to record or perform.

Famous British pop band The Spice Girls is officially back after Victoria Beckham agreed to participate in the restored quintet. Posh Spice, who repeatedly refused to comment on any plans to begin performing again, finally announced her decision to come back, according to The Sun report.

However, the girls are not going to record a new album or perform any time soon. Instead, they look to "explore new possibilities," which could include various talent shows and endorsements, The Guardian  reports.

"We have enjoyed a wonderful afternoon catching up and reminiscing about the amazing times we have spent together. We are always overwhelmed at how much interest there is across the whole world for The Spice Girls. The time now feels right to explore some incredible opportunities together. We all agree that there are many exciting possibilities that will once again embrace the original essence of The Spice Girls while reinforcing our message of female empowerment for future generations," the band's official statement said.

The five reportedly signed a contract awarding them roughly $14.2 million each. Further details are not available at the moment. According to The Sun, the band is reportedly considering TV projects in China, a television talent show, endorsement deals and a greatest hits compilation.

"Victoria [Beckham] and Geri [Horner, nee Halliwell] agreed it would be impossible to be part of a  fully fledged tour because of family and business commitments," Hollywood Life reports, citing an unnamed source close to the band. "Now that she's a top designer, Victoria is concerned about singing but she wants to make money to pump back into her business."

​Since splitting up in December 2000 following the release of their third album "Forever," each member has attempted a solo career, The Guardian noted.

"[Melanie or ‘Mel B'] Brown has acted as a judge on a number of talent shows; Beckham is now a noted fashion designer; Emma Bunton is a radio presenter on Heart London; and Horner has written books and judged on talent shows including the BBC's ‘All Together Now.'"

000000
Popular comments
it's getting to the stage of the posh mums or the posh grannies. Certain groups should remain disbanded.
michael
3 February 2018, 06:54 GMT
000000
It will take allot of payolla to make this fly