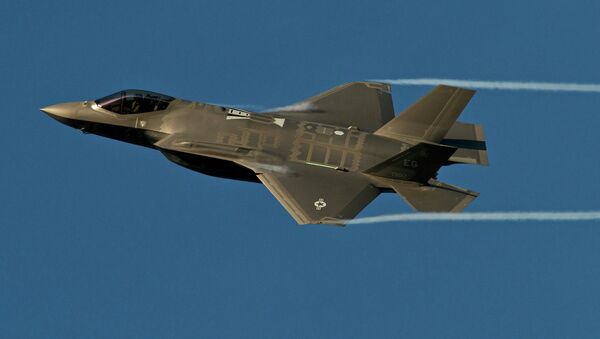 © AP Photo / Airman Magazine
Subscribe
International
India
Africa
“Right now, we can’t afford the sustainment costs we have on the F-35,” Ellen Lord, the new Defense Department undersecretary for defense acquisition and sustainment, told reporters this week. “And we are committed to changing that.”

The F-35 Joint Strike Fighter is the most expensive weapons program in US history and remains the Pentagon's "most significant" program, according to Lord.

According to the US Joint Chiefs of Staff, "sustainment is a key component of performance. Including sustainment planning ‘up front' enables the acquisition and requirements communities to provide a weapon system with optimal availability and reliability to the warfighter at value."

The stealthy F-35 is available to fly missions at a moment's notice only "around 50 percent" of the time it sits in hangars, the Pentagon's Director of Operational Test & Evaluation (DOT&E) said in a report to Congress last week. What's more, this availability rate "has existed with no significant improvement since October 2014, despite the increasing number of aircraft," the testing office said.

The Government Accountability Office has issued comparable criticisms concerning the mounting kinks on the logistical side of sustaining the planes.

"DoD's capabilities to repair F-35 part at military depots are six years behind schedule, which has resulted in average part repair times of 172 days — twice the program's objective," the GAO reported in October. The GAO also found that there was a shortage in spare parts for the aircraft.

"The F-35 aircraft represents the future of tactical aviation for the US military, and is DoD's most expensive weapon system, with sustainment costs alone estimated at more than $1 trillion over a 60-year life cycle," the watchdog noted.

The aircraft's autonomous alert system diagnosing issues that require new parts has been prone to false alarms, or, detecting "failures" that "actually have not failed," the test and evaluation office said. This wreaks havoc on an "already overloaded repair system" because the misdiagnosed parts are "returned to the supply chain" after being sent back to the manufacturer, according to the DOT&E.

Lord offered some vague ideas about how the Pentagon would approach the sustainment cost challenge. "It's really deconstructing a program, as you always would," she said. "One of the things we've been talking about a lot is that we will be data driven," Lord told Defense News. "So, we are frankly wasting people's time if we sit around with opinions and concepts… If that is not backed up by analytical rigor and the data behind it. So, we're practicing all of that on the F-35."