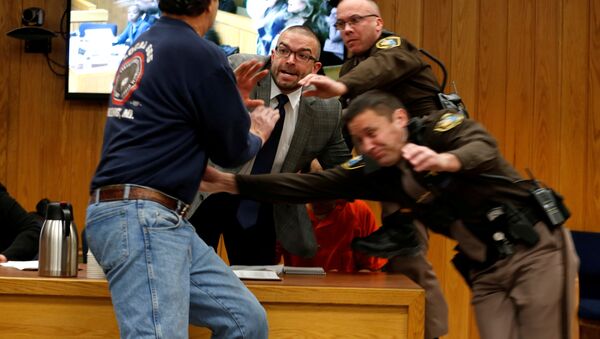 © REUTERS / Rebecca Cook
Subscribe
International
India
Africa
On Friday, the father of three girls abused by Larry Nassar tried to attack the disgraced sports physician during a sentencing hearing in Michigan after the judge declined his request to spend five minutes alone with "the demon" in a locked room.

Moments after the judge gave Randall Margraves, the father of the victims, the chance to express his thoughts on Nassar's abuses, he lunged at the doctor.

​"I would ask you as part of the sentencing to grant me five minutes in a locked room with this demon," Margraves said. Judge Janice Cunningham shut down the request. "Would you give me one minute?"

After getting declined a second time, Margraves rushed toward Nassar after stating that he was "going to have to" take his chances in the courtroom. Within seconds, police officials posted inside the room tackled the frustrated father to the ground.

"Let me at that son of b*tch," Margraves yelled out as he was getting handcuffed. "I want that son of a b*tch."

"Give me one minute with that bastard… one minute… where is he," Margraves yelled out.

While bailiffs tried to get ahold of the situation, muffled cries can be heard in video footage of the incident. As Margraves is being escorted out of the courtroom, Assistant Attorney General Angela Povilaitis is heard urging families to "use your words" and advising them that violence "is not helping your children."

The hearing, which focused on sexual abuse that took place while Nassar worked with Twistars, an elite Michigan gymnastics club, resumed 25 minutes after the failed attack.

Though Cunningham later announced that she had no intention to punish Margraves, she did double down on Povilaitis' statements by saying that it's wrong to "combat assault with assault."

Margraves has since apologized for his actions.

Nassar is expected to be sentenced next week for sexual assault charges filed in Eaton County, Michigan, after testimonies from his victims end. The 54-year-old has already been sentenced to 40 to 175 years in prison after pleading guilty in Ingham County to seven counts of criminal sexual conduct.