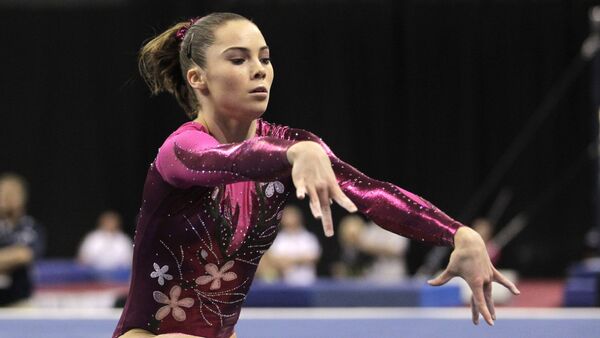 © AP Photo / Jeff Roberson
Subscribe
International
India
Africa
US gymnast McKayla Maroney, who won a gold medal during the 2012 London Olympics, has filed a lawsuit saying officials in USA Gymnastics’ national governing body paid her a hefty sum of money to stay silent about the sex abuse she suffered as a child in the organization.

Maroney, along with her lawyer, John Manly, has filed a lawsuit against USA Gymnastics saying the national body paid her to buy her silence about the fact that she was sexually abused throughout her sports career, starting at the age of 13.

The suit accuses USA Gymnastics, the very organization that openly praised Maroney for having the courage to hold her abuser — Larry Nassar, the former USA Gymnastics women's team doctor, who this year pleaded guilty to multiple sexual abuse and child pornography charges — accountable.

Social Media Reacts to #MeToo Movement as TIME's 2017 Person of the Year
According to a Wall Street Journal report, the organization and Maroney signed a confidentiality agreement in 2016 in which the athlete promised to keep her story out of the public eye. In return, she received $1.25 million from the organization.

The deal also reportedly included a $100,000 penalty if the agreement was violated or spoken of publicly, according to the Guardian.

Maroney kept true to the agreement until October 2017, when she wrote about her alleged abuse on Twitter, as a part of #MeToo campaign. Her Twitter account @McKaylaMaroney is not now available on the social media platform.

According to NBC News, Manly is seeking to have Maroney released from the agreement she signed with USA Gymnastics. It is undisclosed whether USA Gymnastics sought the monetary penalty for the settlement violation from Maroney.

Nassar was employed by USA Gymnastics for two decades until he was fired in 2015 after athletes complained about him. In 2016, two athletes publicly accused him of sexual assault. Since then, some 140 girls have filed complaints against him. He has already begun serving the decades-long prison sentences handed down earlier this year for abuse and pornography offenses.