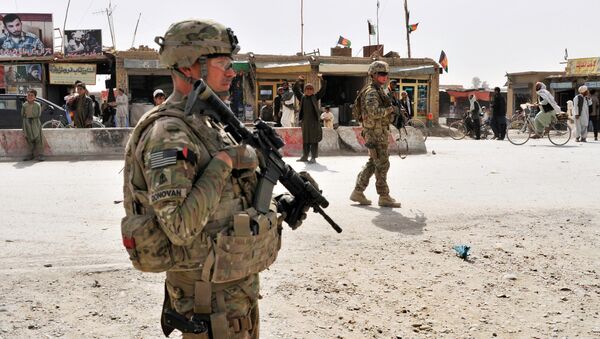 © US Army / Staff Sgt. Shane Hamann
Subscribe
In response to Washington's plans to suspend security assistance to Pakistan, Islamabad is weighing blocking military supplies sent to US forces in Afghanistan via Pakistani territory. Speaking to Sputnik, University of Massachusetts professor and region expert Brian Williams outlined what's next in the shaky relationship between the two countries.

Sputnik: What can you say about Pakistan's intentions? How much of an encumbrance would this be for the United States?

Brian Williams: We've been down this road before. Recall if you will that twice before there have been sort of clashes between the US and Pakistan. On one occasion, US Navy SEALS infiltrated into a tribal zone in Pakistan, trying to kill al-Qaeda targets, and killed civilians. The Pakistanis were enraged, and they [temporarily] closed down the supply lines for troops [supplied via] the Khyber Pass into Afghanistan.

Pakistan May Block Supply Path US Troops Use to Reach Afghanistan
So we've seen this before. It's a relationship that is fraught with tensions and clashing interests. So I think it's part of this whole pattern we've seen ever since the US started with the precedent back in the early 1990s to punish Pakistan for developing nuclear weapons.

Sputnik: How could the move change US attitudes toward Islamabad now, and what implications could follow if Pakistan proceeds with their threat? It's a difficult road ahead, it seems.

Brian Williams: It is indeed. At its height, America had over 100,000 troops in Afghanistan, and they really relied on the Khyber Pass to get these supplies to the vast army fighting in Afghanistan. After the killing of Bin Laden in Abbottabad, Pakistan, there were many voices in Washington, among Republicans in particular, who saw collusion. They sensed that perhaps Pakistan was covering up for Bin Laden and hiding him. I suspect they weren't; we've found nothing in the documents found in the documents found in his compound there in Abbottabad to indicate that he was working for the Pakistanis.

But there is certainly a lot of tension in this relationship. And the main cause of it is of course that Pakistan continues to allow the Afghan Taliban [to be based in areas of] western Pakistan, and to use the territory as a springboard for attacking the US-backed government across the border in Afghanistan. 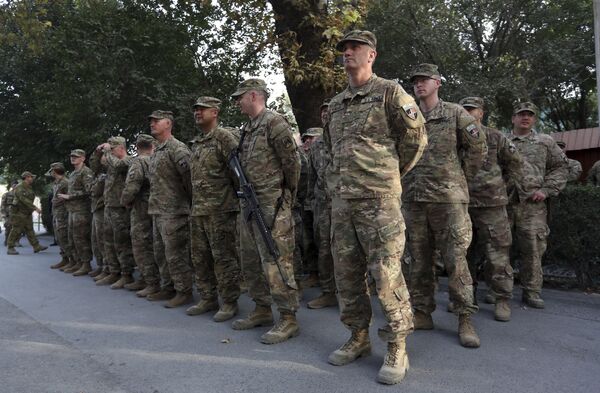 Eastern Afghanistan Proving Deadliest Region for US Forces Worldwide
Sputnik: How well thought-out was President Trump's move regarding the statement he made about cutting off US aid to Pakistan, in your point of view?

Brian Williams: I think Trump's been highly erratic since he's been president. A little while ago he praised the Pakistanis as being 'fantastic', in his typical over-the-top rhetoric. And then suddenly the pendulum swings, and he's trying to hold their feet to the fire and force them to stop supporting terrorism, whether the Afghan Taliban based on their territory, or other jihadi groups [focused] more towards Kashmir or India, like Lashkar-e-Taiba, or Lashkar-e-Jhangvi.

There is this sense that someone got to Trump, who of course is a novice when it comes to foreign policy, and explained to him that Pakistan has this relationship, and serves as a sort of springboard for jihadi terrorism against both India and Afghanistan, but yet here we are pumping tens of billions of coalition support funds into the country to support their anti-terrorism efforts. 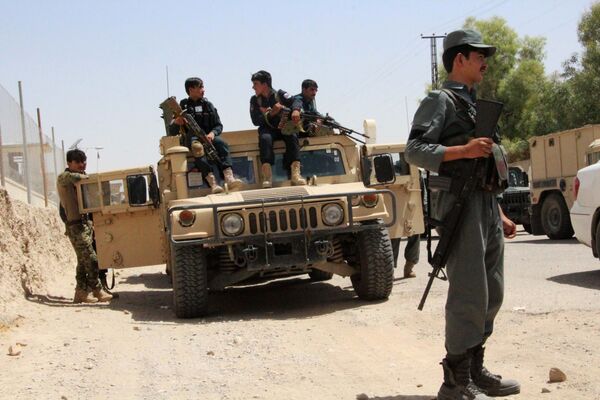 Afghan security personnel sit on atop an armoured vehicles amid an ongoing battle with Taliban militants in the Gereshk district of Helmand province on July 22, 2017
© AFP 2021 / NOOR MOHAMMAD

Sputnik: What's your outlook then for the future of US-Pakistani relations? Do you think things will go back to the way they were, or is this the start of a new order between countries which have long had a very delicate relationship?

Brian Williams: I really strongly assessed this on-and-off relationship between Pakistan and America going back to the 70s in my recent book 'Predators: The CIA's Drone War on Al-Qaeda'. You have these ups and downs, depending on the foreign policy initiatives of the US administration at the time. And I think that the Trump administration has swung the pendulum this way, and there will be a lull in relations. But it tends to come back and forth, and I suspect the breach will be healed, and will go back to business as usual.

But the Pakistanis just don't trust America. Pakistan annually has the worst ratings for popular support for America in the world. America's sorely unpopular in Pakistan. They feel used from back during the 1980s [during the Soviet War in Afghanistan]. So there is deep distrust. But in the long run, Pakistan cannot [manage without US support], and America needs Pakistan to wage its war in Afghanistan. So despite the rift, I suspect that sooner or later, the breach will be healed. 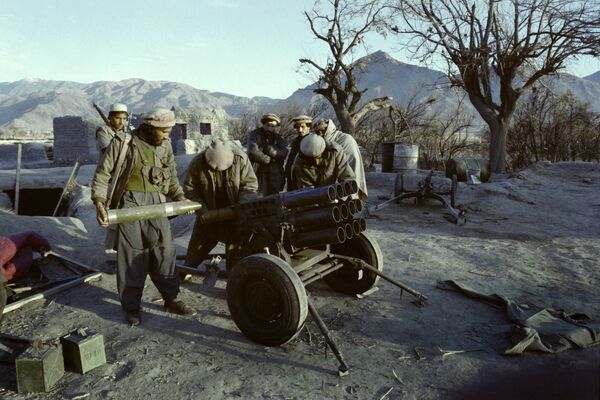 Afghan mujahideen prepare a rocket attack on the government troops in Shaga, Eastern Nangarhar province, on January 15, 1989 during the Afghan Civil War opposing the Islamic Unity of Afghanistan Mujahideen and the Democratic Republic of Afghanistan (DRA) supported by Soviet Union
© AFP 2021

Sputnik: What's your best advice to these two countries then to heal this wound that has been opened up? What can you suggest or recommend that may result in a solution to this problem?

Brian Williams: I think the two sides should sit down and negotiate and try to find out how we can move ahead with perhaps having the Pakistanis attack and dislodge the Taliban and other jihadi groups in our interest, and theirs too. Because they're isolated diplomatically…On our part, America needs to understand that Pakistan is a sovereign nation…They do have interests that diverge from ours, especially in Afghanistan. One thing the Pakistanis are very afraid of in Afghanistan is growing Indian presence. We need to recognize that legitimate fear on behalf of the Pakistanis. So I think we need to have a huge diplomatic effort to save this very, very important strategic relationship with Islamabad, perhaps one of the greatest key allies thus far in the war on terror.

The views and opinions expressed by Dr Brian Williams are those of the expert and do not necessarily reflect those of Sputnik.

000000
Popular comments
if anyone did 'get to' trump then that is politics.
michael
9 January 2018, 22:48 GMT
000000
the Governament of Pakistan is more close to a corrupted military Courts than a freely elected ones, so said me a friend of mine from Lahore but living in Islamabad, He said me too, that popular Pakistany belief of Afghani reaching their Country was: all spyes!
francescoslossel
9 January 2018, 23:57 GMT
000000
Newsfeed
0
New firstOld first
loader
LIVE
Заголовок открываемого материала
Access to the chat has been blocked for violating the rules . You will be able to participate again through:∞. If you do not agree with the blocking, please use the feedback form
The discussion is closed. You can participate in the discussion within 24 hours after the publication of the article.
To participate in the discussion
log in or register
loader
Chats
Заголовок открываемого материала
Worldwide
InternationalEnglishEnglishMundoEspañolSpanish
Europe
DeutschlandDeutschGermanFranceFrançaisFrenchΕλλάδαΕλληνικάGreekItaliaItalianoItalianČeská republikaČeštinaCzechPolskaPolskiPolishСрбиjаСрпскиSerbianLatvijaLatviešuLatvianLietuvaLietuviųLithuanianMoldovaMoldoveneascăMoldavianБеларусьБеларускiBelarusian
Transcaucasia
ԱրմենիաՀայերենArmenianАҧсныАҧсышәалаAbkhazХуссар ИрыстонИронауОssetianსაქართველოქართულიGeorgianAzərbaycanАzərbaycancaAzerbaijani
Middle East
Sputnik عربيArabicArabicTürkiyeTürkçeTurkishSputnik ایرانPersianPersianSputnik افغانستانDariDari
Central Asia
ҚазақстанҚазақ тіліKazakhКыргызстанКыргызчаKyrgyzOʻzbekistonЎзбекчаUzbekТоҷикистонТоҷикӣTajik
East & Southeast Asia
Việt NamTiếng ViệtVietnamese日本日本語Japanese中国中文Chinese
South America
BrasilPortuguêsPortuguese
NewsfeedBreaking
12:04 GMTTeen With Lego Gun Triggers Police Operation in German Town
12:01 GMTMachete-Wielding Man Injures Four People in Canada's Calgary
11:38 GMTRussian Deputy Prime Minister Not Ruling Out Repetition of Energy Crisis in Europe
11:24 GMTNorth Korean Website Slams 'Squid Game' as Showing 'Hell-Like Horror Where Only Money Matters'
11:07 GMTDeath Toll From Kandahar Mosque Bombing Rises to 63
11:02 GMTFrench Politician: US Has Moral and Legal Obligation to Unblock Afghan Assets & Let the Nation Be
10:59 GMT‘Killed Serving the People’: UK Media Shows Rare Display of Cross-Party Unity in Tribute to Dead MP
10:50 GMTIs Russia in Danger of Running Out of Gold Deposits?
09:08 GMTUS-Greek Bases Pact Signals Bid to Pressure Turkey, Dominate East Mediterranean
09:02 GMTAustrians Invited to Presidential Palace for COVID-19 Shots
09:00 GMTNASA's Lucy Mission Blasts Off to Examine Trojan Asteroids
09:00 GMTPremier League: Five Biggest Games of Matchweek Eight
08:55 GMTUK Police Ordered to Immediately Review MPs' Security Arrangements After Fatal David Amess Stabbing
08:30 GMTSeveral Dead and Dozens Injured: What Was Behind Thursday's Bloody Events in Lebanon?
07:33 GMTISS Crew Was Woken Up by Siren at Night
07:16 GMTAnother Day, Another Blunder: Psaki to ‘Choose Words More Carefully’ After Ethics Watchdog Complaint
07:12 GMTNetflix Fires Organiser of Trans Employee Walkout for Leaking Internal Documents, Reports Say
06:08 GMTFour Indian Paramilitary Personnel Injured in Blast at Raipur Railway Station
05:59 GMTBiden Admits He Will Have to 'Build Back Better' With Less, Is ‘Not Going to Get $3.5 Trillion’
05:45 GMT‘Sensational’ Remains Buried by Ancient Vesuvius Eruption Discovered at Herculaneum