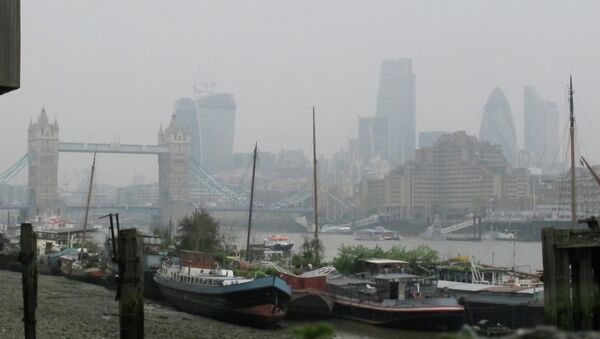 The eight episode series, premiering on BBC One on January 1, depicts one wealthy Russian mafia family's unsuccessful efforts to put criminal life behind them and build a legitimate life in the UK.

Russia's Embassy in London, well-known for its regular trolling of UK politicians and media for their attacks on Russia, is incensed over the new show, intimating that it is yet another portrayal of Russians as criminals. On Thursday, the Embassy published a poll asking its followers whether they knew "how many Russian offenders there are actually in UK jails?"

On Saturday, the Embassy published the answer: fewer than ten. Nearly 60% of its followers correctly guessed the answer.

Correct answer- fewer than 10. Crime rate among Russians in UK is well below national average. Good that our followers are not buying into the cliches BBC is spreading. pic.twitter.com/nbqL7v4EAL

"Good that our followers are not buying into the clichés BBC is spreading," the Embassy quipped.

Trollolol, Holiday Edition: Russian Embassy in UK Reminds MP That It's Not 1984
According to the Russian diplomats, the crime rate among Russians in the UK is well below the national average.

The Telegraph newspaper did some digging, and found that that according to British Ministry of Justice figures, there were actually 35 Russian nationals imprisoned in UK jails as of September 2017. That figure is still significantly below the 891 Poles, 424 Lithuanians and 246 Portuguese nationals imprisoned in UK jails, the paper noted. Criminals of Irish, Romanian, Albanian, Jamaican, Pakistani, Indian, Somalian and Nigerian nationality round out the top ten list of foreign criminals incarcerated in UK jails.

Accounting for the discrepancy, the Russian Embassy said that its figures were based on notifications it received from British authorities themselves. "We also double check these notifications since the persons recorded as 'Russians' are often not Russian nationals," the Embassy explained.