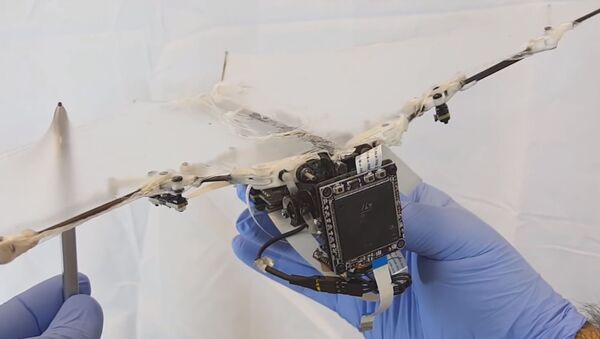 © CalTech/YouTube
Subscribe
International
India
Africa
The United States’ fixation on new drone technology has spurred researchers to solicit development proposals for an unmanned aerial vehicle fueled by lasers that looks like a bat.

"The biological study of agile organisms such as bats and flying insects has yielded new insights into complex flight mechanics of systems with a large number of degrees of freedom and use of multi-functional flight surface materials," a Broad Agency Announcement published Wednesday explains. A Broad Agency Announcement is a "competitive solicitation procedure used to obtain proposals for basic and applied research," according to the US Army Research Laboratory.

The Defense Enterprise Science Initiative has started giving out grants to build "bat-like drones that can be powered with directed-energy beams" from nearby planes, Defense One reported Thursday.

The power could be transmitted from ground sources targeting the animal drone as well as a "high-altitude platform," like another aircraft.

The Pentagon's Defense Advanced Research Projects Agency is also working on a program to deploy swarms of mini "Gremlin" drones by launching them from fighter or transport aircraft, which will later retrieve them.

Yet another way the Defense Department is scheming to incorporate drones into its warfighting is by dropping fake bombs that unleash miniature wooden-propeller drones the US hopes will better evade radar detection.