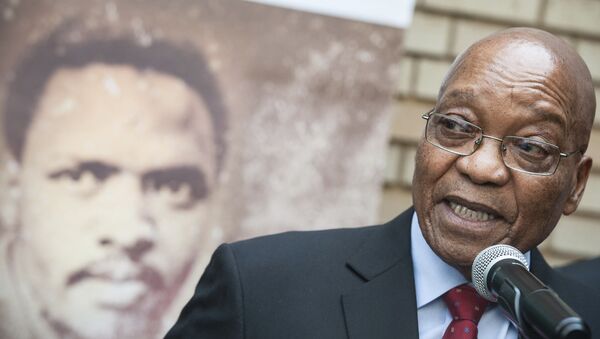 MOSCOW (Sputnik) – South Africa’s Constitutional Court on Friday ruled that the lower house of the country’s parliament had not done enough to hold President Jacob Zuma accountable in a corruption scandal.

The case was brought by the opposition Economic Freedom Fighters (EFF)‚ United Democratic Movement (UDM) and the Congress of the People (Cope) parties, who claim that the National Assembly’s speaker Baleka Mbete had not compelled the lawmakers to scrutinize Zuma’s conduct. The parties require a fact-finding ad hoc committee to be established for interviewing the president over misappropriation of public funds for upgrades to his private home in Nkandla. Also, the parties claim that there is evidence for impeachment proceedings to be launched against Zuma.

"We conclude that the Assembly did not hold the president to account. The Assembly has failed to fulfill two of its obligations," court justice Chris Jafta read out the judgment, reached by the majority of the justices, involved in the case, as quoted by South African News24 outlet.

Chief Justice Mogoeng Mogoeng, however, disagreed with the judgment, saying that the ruling represented a judicial overreach and affected the separation of powers, the news outlet added.

The Nkandla scandal dates back to 2011, when the South African public prosecutor received complaints over misappropriation of funds by Zuma. The prosecutors’ report of March 2014 determined that Zuma benefited improperly from expenditures on his homestead, prompting Zuma to apologize to the nation.

In March 2016, the Constitutional Court ruled Zuma had failed to uphold, defend, and respect the constitution.