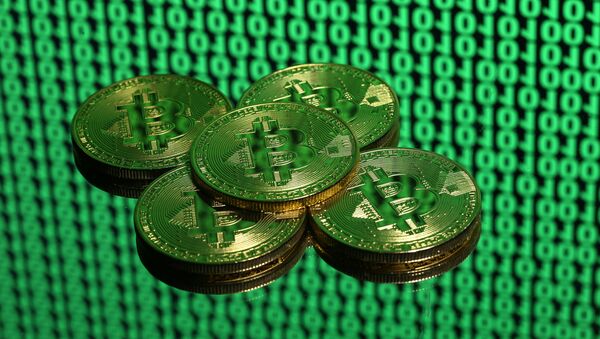 © REUTERS / Dado Ruvic/Illustration
Subscribe
After receiving inputs about a phenomenal increase in investments into virtual currencies by Indians, the Government issued an alert warning to citizens to participate in Bitcoin trading “at their own risk.”

New Delhi (Sputnik) — In a plainly worded warning to Bitcoin enthusiasts, the Indian government has compared Bitcoin to Ponzi schemes which it says have 'heightened risk of investment bubble' in what is being construed as a hesitation to bring in laws to regulate cryptocurrency trading.

"The investors and other participants deal with these virtual currencies entirely at their risk and should best avoid participating therein," the Finance Ministry warned in a statement.

The alert was issued by India's Ministry of Finance on Friday morning after it received inputs indicating a phenomenal increase in investment into these virtual currencies despite several warnings from the Reserve Bank of India (RBI) — the country's central bank and market regulator Securities & Exchange Board of India (SEBI).

"There is a real and heightened risk of investment bubble of the type seen in Ponzi schemes which can result in sudden and prolonged crash exposing investors, especially retail consumers losing their hard-earned money. Consumers need to be alert and extremely cautious as to avoid getting trapped in such Ponzi schemes," India's Ministry of Finance said in a statement.

India’s Cash Crunch Sends Bitcoin Soaring Towards New High
A Ponzi scheme is "an investment fraud that involves payment of purported returns to existing investors from funds contributed by new investors," according to the US Securities and Exchange Commission.

The government has also cautioned citizens about hacking and malware attack on their stored money in digital/electronic format. "Virtual currencies are not backed by Government fiat. These are also not legal tender. 'Virtual Currencies' are neither currencies nor coins. As transactions of virtual currencies are encrypted they are also likely being used to carry out illegal/subversive activities, such as terror-funding, smuggling, drug trafficking and other money-laundering Acts," the Finance Ministry statement added.

RBI had cautioned three times, in December 2013, February 2017 and December 2017, about the potential financial, operational, and legal, customer protection and security related risks that they are exposing themselves to by investing in Bitcoin and/or other virtual currencies.

Russia Envisions Taxation of Cryptocurrency Mining As Business Activity
Recently there were several incidents of websites dealing with virtual currencies like Bitcoin suddenly closing the virtual platforms. One such website Bitcoin-India.org stopped trading in November & December. It had earlier claimed that there were approximately 1,100,000 users trading at its platform.

"Recently, in the absence of any recognition or regulation, many people have become prey to the Bitcoin-india.org, which overnight duped many people of their hard-earned money. In such a situation, the investors are left with no option but to approach the Cyber Crime Cell or Economic Offence Wing, whereby getting their complaint registered under section 406 and 420 of the Indian Penal Code. However, this may not also help the investors as the concept of digitization and virtual currency is new for India and the authorities are not well equipped to fight such situation and as such it becomes incumbent for the Government of India to take steps towards better rules and regulations and dedicating a whole wing which should keep a better watch over such transactions," Jitendra Singh, a corporate lawyer told Sputnik.

As financial literacy is at a minimal level in India, more people are vulnerable to schemes that dupe the investors by promising better returns.

"Without a doubt, India is potentially a vast market for investors for virtual currencies like Bitcoin, however, the Government of India has to take drastic steps to impose better rules and regulations to check on the frauds," Jitendra Singh added.