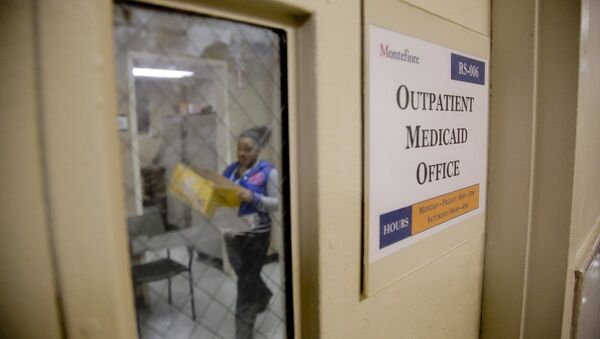 © East News / AP
Subscribe
On the heels of the Republican-controlled House, Senate and White House passing a $1.5 trillion tax cut bill, a renewed preoccupation with rising national debt levels has working-class advocates concerned that Great Society-era programs such as Medicaid and Medicare are next on the chopping block in Washington.

Since US President Donald Trump was sworn into office, polls have shown more people favor increasing programs like Medicaid and Medicare than cutting them. The only area people support cutting spending for is health programs overseas, a Kaiser Family Foundation survey found.

House Speaker Paul Ryan has been fantasizing about gutting Medicaid, a joint federal and state initiative to help with medical costs for families and individuals with limited resources and income, since he was in college "drinking at a keg."

"So Medicaid, sending it back to the states, capping its growth rate; we've been dreaming of this since I've been around — since you and I were drinking at a keg," the Wisconsin Republican told the National Review's Rich Lowry in March.

"I've been thinking about this stuff for a long time. We're on the cusp of doing something we've long believed in," Ryan said at the time.

However, the effort to repeal and replace the Affordable Care Act, better known as Obamacare, fell flat on its face. Seeking a legislative accomplishment, Trump and Congressional Republicans pivoted to passing tax reform, which Trump signed just before the end of 2017.

Congress passed the #TaxBill and also approved a massive increase in the military budget in the past two months. Very strange priorities when money for human needs, peace, and justice is so sorely needed… #ResistWarTaxes2018 pic.twitter.com/Pd0Hr8kKVc

With tax reform out of the way, Ryan and the GOP can go back to realizing their dream of destroying already weak social services. With the US already one of the only industrialized nations in the world that doesn't guarantee health care as a right to its people, Ryan wants to go one step further and eliminate the modest programs that help Americans at the lowest income levels access medical treatment.

Huckabee is a nice guy but will never be able to bring in the funds so as not to cut Social Security, Medicare & Medicaid. I will.

I was the first & only potential GOP candidate to state there will be no cuts to Social Security, Medicare & Medicaid. Huckabee copied me.

​While Democrats have championed programs from US President Franklin D. Roosevelt's New Deal and President Lyndon B. Johnson's Great Society platforms for decades, "Democrats were just as willing to throw these programs under the bus" during the administration of Democratic President Barack Obama, Flowers said.

We have to make the U.S.A. RICH again so that we can afford to pay Social Security, Medicare,and Medicaid and STRONG to keep our enemies out

"They just do it in a way that's not as obvious as the Republican party," the activist told Sputnik News.

For example, the Affordable Care Act "redefined social insurance" to transform social security and other basic universal services into a means-tested program "where people have to qualify" in order to receive certain health benefits, Flowers said.

But if even if Democrats can't be trusted, a surprising figure might stand in the way of Ryan's axing of some of the most popular programs the federal government has ever instituted: Senate Majority Leader Mitch McConnell.

"The sensitivity of entitlements is such that you almost have to have bipartisan agreement in order to achieve a result," the Kentucky senator told Axios last week, adding that he would "not expect to see" the Senate take up partisan reforms with a slim 52-48 majority.

"I'd like to see us pivot to infrastructure," Senator Shelly Capito (R-WV) told Politico Wednesday.