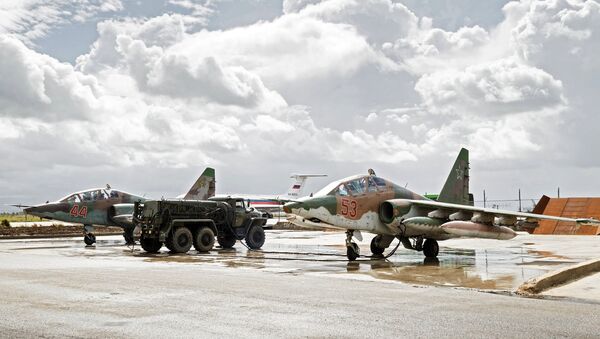 "Last week, the supreme commander-in-chief approved the structure and staff of the main bases in Tartus and Hmeymim. We've started forming a permanent group there," Shoigu said.

The Federation Council, the upper house of Russia's parliament, has ratified the agreement with Syria to expand the Russian naval facility in Syria's Tartus on December 26.

The statement follows Russian President Vladimir Putin's surprise visit to the Hmeymim airbase on December 11, and his order to start the withdrawal of the main part of Russian troop contingents in the region back to their permanent location, with the bases in Hmeymim and Tartus maintaining their operation.

The minister went on to say that the Russian armed forces are equipped with modern weapons at 59.5%, while the serviceability of weapons is at 94%. The anti-aircraft defense of the Hmeymim airbase is ensured by the cutting edge S-400 system, while S-300 surface-to-air missile systems, as well as the Bastion coastal missile systems with cruise missiles, cover the Russian Navy base in Tartus.

In his previous statements, Shoigu specified that the Russian military contingent had already begun the pullout from Syria, noting, however, that the timetable of the withdrawal would be determined by the situation on the ground.

Russia began a two-year long military campaign in Syria in late September 2015 at the request of Assad to fight Daesh, resulting in the clearing out of more than 90 percent of Daesh-held territories, including the ancient city of Palmyra, and killing of over 54,000 terrorists.

However, Russia continues its humanitarian assistance to the war-torn country, delivering tons of aid and providing medical support on a daily basis.