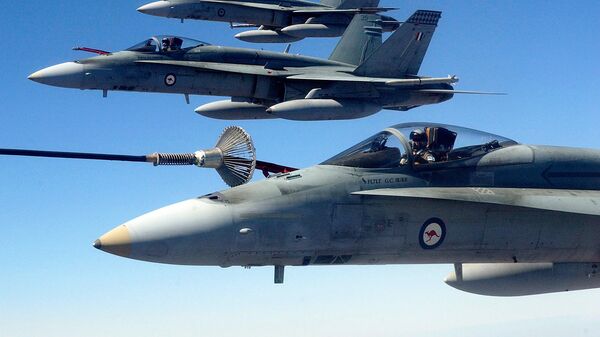 MOSCOW (Sputnik) - Australian Defense Minister Marise Payne on Friday declared an end to the nation’s airstrike operations in Syria and Iraq, although she admitted the challenge was not over yet, local media reported.

The decision was taken, Payne said, after consultations with Iraq and the international coalition fighting the terror group Daesh, according to The Australian, a newspaper.

"The Australian government has determined that we will bring home our six Super Hornet strike aircraft from the Middle East, marking the end of Australia’s air strike operations in Iraq and Syria," she told reporters.

Our six F/A-18F Super Hornets will return home in January marking the end of Australia​’s successful air strike operations in Iraq and Syria.

Payne said the broad battle was "most certainly" over, but Australia would not underestimate the efforts that Daesh might still make, she added.

Australia Pledges to Consider US Request for More Help in Anti-Daesh Fight
Australia's support aircraft, the E-7A Wedgetail surveillance plane and the refueling plane, will further provide assistance for the US-led Coalition operations and the Iraqi Security Forces.

"They will continue to support the Iraqi Security Forces and counter-terrorism service in their work to ensure that Daesh is precluded from taking any further hold," Payne noted.

The Australian Defense Minister's statement comes after the Iraqi Prime Minister announced earlier this month that the territory of Iraq had been freed from Islamists and declared that the fight is over.