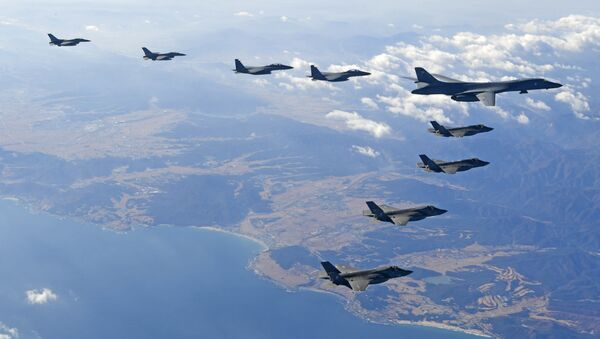 © AP Photo / South Korea Defense Ministry
Subscribe
MOSCOW (Sputnik) - The chance of a military conflict happening between the United States and North Korea is dependent upon the activities of all sides involved in the crisis on the Korean Peninsula, US National Security Adviser Herbert Raymond McMaster told the BBC broadcaster in an interview released on Tuesday.

"The chances of war, who knows what they are. They could go up or down, I think, based on what we all decide to do. North Korea is a great threat to all civilized people across the globe," McMaster said in response to a question about the possibility of an armed conflict between the United States and North Korea.

The US official added that while Washington had been exerting efforts to settle the crisis by peaceful means, this path to settlement was not the only option on the agenda.

"We are not committed to a peaceful [resolution], we a committed to a resolution [in general]. We want the resolution to be peaceful, but as [US] President [Donald Trump] said, you know all options are on the table, and we have to be prepared if necessary to compel the denuclearization of North Korea without the cooperation of that regime," he added.

The situation on the Korean Peninsula has escalated since this summer as Pyongyang conducted a nuclear test and several missile tests, with the latest taking place on November 28, when the DPRK tested its most advanced intercontinental ballistic missile (ICBM) yet, known as the Hwasong-15, capable of reaching any target within the mainland United States.

N Korea Says US Naval Blockade Would Be 'Big Step' Towards Nuclear War - Reports
The United States and its allies have, in turn, amassed troops and military equipment in close proximity to North Korea, where they have also engaged in military exercises.

While the US president and his national security adviser have been hinting at a possible "military option" with regard to the crisis on the Korean Peninsula, the senior administration members have emphasized that currently Washington relies on diplomatic means, with US Secretary of State Rex Tillerson announcing last week that Washington is ready to start direct talks with North Korea without preconditions despite Donald Trump's earlier statements voicing skepticism about negotiating with Pyongyang.

000000
Popular comments
Perhaps, Kim Jong Un can become like the queen of England in these modern times and let North Korea settle into a more prosperous life for its citizens. And yes I know politicians are some of the most self serving individuals on the planet and there is too much bickering and so much waste, but that is the world today.
Rokenbok
19 December 2017, 13:29 GMT
000000
North Korea is communist country like China. NK is not exporting its political ideology to no one. North Korea is a great threat to all civilized people across the globe," McMaster said, who this man is talking in representation. He is as a parrot that repeat what was told to say one and many more. I would not even give this man a space to put his views when everybody know who he talk about and who is his boss,