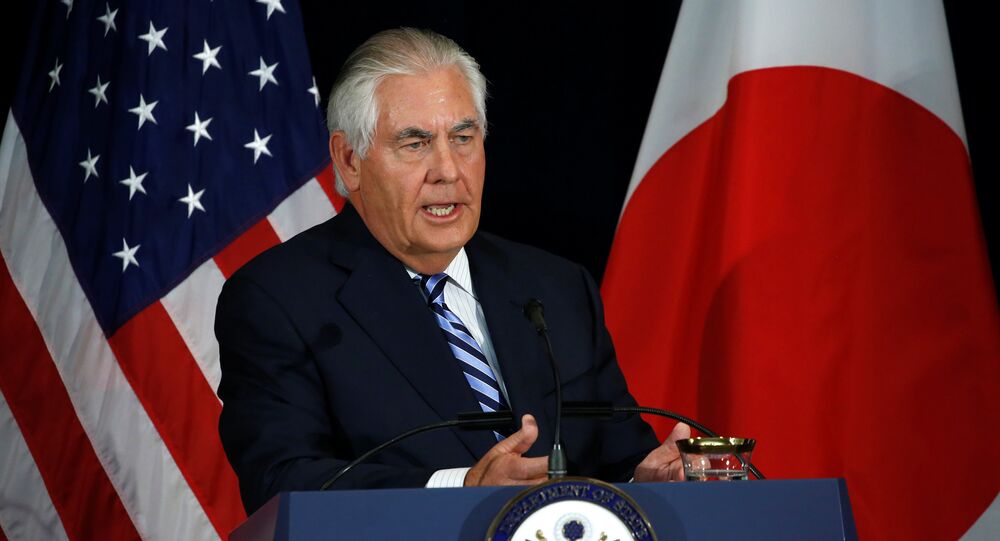 The US will continue its pressure campaign and diplomatic efforts to bring North Korea to the negotiating table to suspend its nuclear and ballistic missile programs, US Secretary of State said during a press conference at the UN on Friday.

After the UN press conference on December 15, US Secretary of State Rex Tillerson expressed his hope that North Korean policy would change as a result of the international pressure exerted on it.

"We hope that this pressure will force North Korea to follow an alternative course," he said following the meeting.

© AP Photo / Jorge Silva/Pool Photo
Trump Says Would Like to Have Russia's Help With North Korea
Additionally, the United States will not accept any preconditions of negotiations with North Korea, including a "freeze-for-freeze" deal involving both sides halting their military activities, US Secretary of State Rex Tillerson told reporters on Friday.

Secretary Tillerson: Our communication channels remain open. #NorthKorea knows they are open. They know where the door is. They know where to walk through that door when they want to talk. pic.twitter.com/nfE2ChN7ma

However, Tillerson concluded that the US communications channels remain open to interact with North Korea.

The top US diplomat on Friday attended a UN Security Council ministerial meeting, where he reiterated calls on all member states to work together and maintain maximum pressure on Pyongyang to bring its nuclear and ballistic missile programs to an end.

On December 13, US Secretary of State Rex Tillerson said that Washington is ready to start direct talks with North Korea without preconditions. This statement was supposed to symbolize a change of the US approach to the North Korean developing nuclear program. The recent intercontinental ballistic missile (ICBM) test was conducted on November 28. An operational Hwasong-15 missile, that was tested, is believed to strike the US mainland.

The relations between the United States and North Korea are strained. Despite the fact that the Trump administration has made certain progress in exercising diplomatic pressure over the North Korea, in particular, economic sanctions and diplomatic isolation, over the rebellious Asian nation, Pyongyang is still unlikely to curb its' nuclear programme.