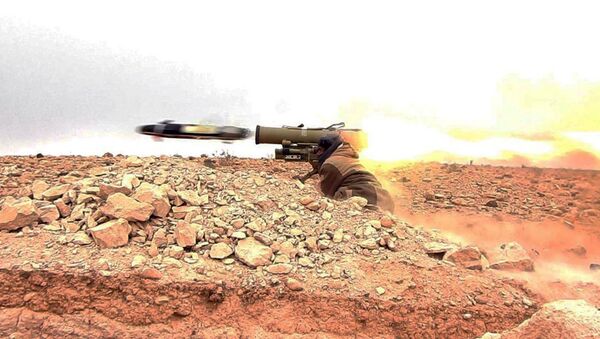 © AP Photo / Militant Photo
Subscribe
An international arms monitor has reported that US military weapons that were covertly provided to Syrian rebel groups were in the hands of Daesh within two months of their delivery.

The study was conducted by the UK-based Conflict Armament Research (CAR) and funded by the European Union and the German government. CAR studied 40,000 weapons recovered from Daesh since 2014 and found that a large amount of them were US arms given or sold to Syrian rebel groups.

In one case, an arsenal including anti-tank weapons switched hands from the US to Syrian rebels to Daesh in only a two month period.

"Supplies of materiel into the Syrian conflict from foreign parties — notably the United States and Saudi Arabia — have indirectly allowed IS [Daesh] to obtain substantial quantities of anti-armor ammunition," read the CAR report. "These weapons include [anti-tank guided weapons] and several varieties of rocket with tandem warheads, which are designed to defeat modern reactive armor."

The study was not able to conclude whether or not the rebels willingly gave the weapons to the Islamic militant group or if Daesh stole or captured them.

In at least one instance, a US-backed militia is known to have had its weapons seized by Islamic militants. Division 30, Syrian rebels armed and trained by the CIA, were ambushed by the al-Qaeda linked al-Nusra Front in August 2015, the militants seizing their armaments and effectively destroying the group.

Other US-trained militants are known to have defected to Daesh or al-Nusra, often bringing their weapons with them.

"These findings are a stark reminder of the contradictions inherent in supplying weapons into armed conflicts in which multiple competing and overlapping non-state armed groups operate," the CAR report read. "Under such circumstances, it is difficult to exert effective control over which groups ultimately gain custody of the weapons."

However, the report did conclude that the attempts of foreign powers to arm Syrian rebel groups in their fight against the government of Syrian President Bashar al-Assad "have significantly augmented the quantity and quality of weapons available to [Daesh] forces," the report concluded.

Daesh also captured a significant number of US weapons from the Iraqi military during their 2014 and 2015 offensives, when they seized large amounts of territory in western Iraq and defeated the Iraqi military in several engagements.

Other countries that helped to arm, train, coordinate, or support Syrian rebel groups include France, the UK, Jordan, Saudi Arabia and Qatar. Turkey, which has deployed thousands of soldiers to Syria, is the most prominent support of Syrian rebel groups.

Timber Sycamore became a sticking point of Berlin-Washington relations because the weapons were delivered to the Middle East from the US Air Force base in Ramstein, Germany. They were generally purchased from Eastern European arms manufacturers under US and Saudi government contracts.

The US continues to arm and support the Syrian Democratic Forces (SDF), a primarily Kurdish coalition that is independent from both the Assad government and Syrian rebels, spending most of their time fighting Daesh. The SDF currently holds Raqqa, once Daesh's capital in Syria, which was retaken after four months of fierce fighting.

The report found no evidence of SDF weapons falling into the hands of Daesh.