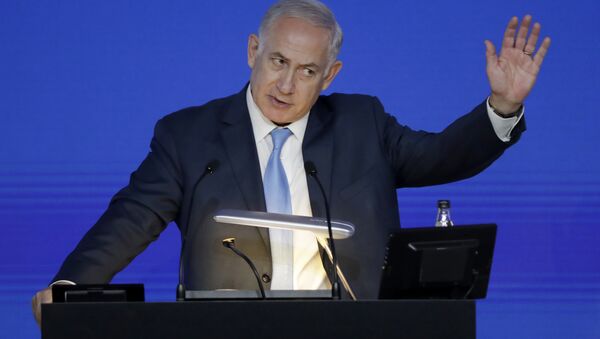 © AP Photo / Matt Dunham
Subscribe
International
India
Africa
Israeli Prime Minister Benjamin Netanyahu said that he was "not impressed" with the statements made by the Organization of Islamic Cooperation (OIC) on the issue of the United States' recognition of Jerusalem as the capital of Israel.

TEL AVIV (Sputnik) — Netanyahu expressed confidence Wednesday that many states would follow the example of the United States and recognize Jerusalem as the capital of Israel, adding that he was "not impressed" with the latest statements made by the OIC on the issue.

"We are not impressed with all these statements. Finally, the truth wins, and many countries will recognize Jerusalem as the capital of Israel and relocate their embassies there," the Prime Minister said, urging the Palestinians "to recognize reality and work to achieve peace instead of promoting radicalization."

Earlier in the day, representatives of 57 Muslim countries gathered in Istanbul for an extraordinary OIC summit on the issue of Washington's recognition of Jerusalem as the Israeli capital. In a declaration, the OIC said that Washington had lost its role as a mediator in the Middle Eastern settlement after this move. The participants also declared East Jerusalem the capital of the State of Palestine and invited other countries to follow suit.

The summit came shortly after Turkish President Recep Tayyip Erdogan described Israel as a "child-killing terrorist state," and vowed to use "all means" to counter the US diplomatic move.

Palestinian President Mahmoud Abbas said at the summit that Palestine was planning to apply to become a full member of the United Nations and threatened to withdraw from treaties previously signed with Israel.

World
Russia's Position on Israeli-Palestinian Issue Not Coinciding With Erdogan's
Israel considers Jerusalem, a holy city for three major religions, its capital, including the city’s eastern parts and the historic center, seized from Jordan in 1967 during the Six-Day War. The international community does not recognize the annexation of East Jerusalem and insists that the status of the city be determined in an agreement with Palestine, which claims the eastern part of Jerusalem. For this reason, all foreign embassies in Israel are located in Tel Aviv.

A week ago, Donald Trump recognized Jerusalem as the capital of Israel despite objections from across the Arab world. Hundreds of protesters took to the streets in Israel, which resulted in tense clashes between Palestinians and Israeli security forces. While the international community condemned the move, Hamas, the Palestinian Isamic fundamentalist organization, announced the beginning of the third "intifada" Tuesday.