Russia's Position on Israeli-Palestinian Issue Not Coinciding With Erdogan's 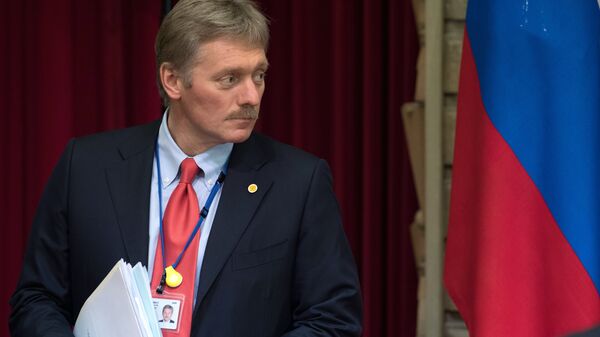 Turkish President Recep Tayyip Erdogan, speaking at the extraordinary summit of the Organization of Islamic Cooperation in Istanbul, called Israel "a terrorist state" and proposed to proclaim Jerusalem the capital of Palestine in response to US actions.

Peskov went on to say that the “Russian position on Jerusalem, on the Middle Eastern resolution, is known very well,” referring to the so-called two-state solution that stipulates the coexistence of Israel with capital in Western Jerusalem and the independent Palestine with the capital in East Jerusalem.

Turkish President Erdogan said at @OIC_OCI extraordinary summit that Trump's decision to recognize Jerusalem as Israel is a reward for Israeli “terror acts.” Erdogan urged the U.S. to reverse its decision on recognizing Jerusalem as Israel’s capital. #OCIPalestine #AlQuds pic.twitter.com/rjeXPbHoFN

​​Peskov declined to say how Erdogan’s position could be construed within the issue of settling the Palestinian-Israeli conflict. "I have nothing to add to what was said," he said.

According to Vladimir Putin, the agreement on the status of Jerusalem should be the subject of direct negotiations between Palestine and Israel.

Last week, US President Trump announced the recognition of Jerusalem as the capital of Israel and signed a document on the transfer of the American embassy to there from Tel Aviv.

The US decision was positively received in Israel but triggered a negative reaction from many countries, primarily the countries of the Middle East and Palestine.

After that, Palestine withdrew from the negotiation process with Israel and rejected the US as an intermediary in this matter.

Clashes of Arabs with the Israeli military have began in the Palestinian territories.

Britain, France and Germany condemned Trump's decision. The leaders of the Muslim states of the Middle East and North Africa criticized the actions of Washington.