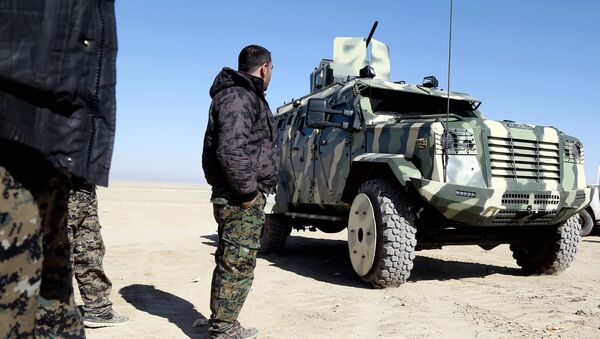 A representative of the Pentagon and the press office of the US-led coalition have commented on the Russian troops' withdrawal from Syria announced by President Putin earlier in the day, while visiting the Hmeymim airbase in Latakia.

“We will continue to deconflict operations with Russia as long as it is necessary to achieve our mission to defeat Daesh,” Joint Task Force Operation Inherent Resolve's press office told Sputnik.

According to the coalition's press office, more fighting will have to take place to eliminate the remaining pockets of Daesh terrorists in the Middle Euphrates River Valley, while hard work remains to be done to ensure their lasting defeat in the region.

“The Syrian Democratic Forces (SDF) will continue operations to clear the northern and eastern sides of the Euphrates River,” the coalition stated.

“The Coalition is 100% committed to the enduring defeat of Daesh and we will continue to support our SDF partners with precision strikes against all Daesh terrorists. The SDF also provides the security that enables stabilization assistance to be delivered to liberated areas.”

Sputnik has also spoken with Pentagon spokesperson Eric Pahon, who said, the Russian troops' withdrawal from the Arab Republic doesn't "affect US priorities in Syria."

"The Global Coalition will continue to operate in Syria in support of local forces on the ground, to complete the military defeat of ISIS [Daesh, banned in Russia] and stabilize liberated territory, in turn allowing for displaced Syrians and refugees to return," Pahon added.

World
Top 5 Facts About Russia's Military Operation in Syria
The US-led coalition has reacted to an announcement made by President Putin earlier in the day on the Russian troops' withdrawal from Syria. While visiting the Hmeymim airbase in Latakia, Putin has also met Syrian President Bashar Assad, who has thanked Moscow for its effective assistance in the country's fight against terrorism.