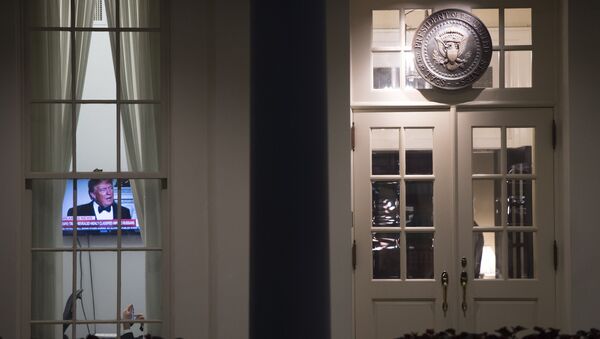 While US President Donald Trump says that he doesn't "get to watch much television," media reports have revealed the opposite.

According to the unconfirmed report that is yet to be commented on by Trump, the US leader starts his day around 5:30 a.m. by watching CNN, which he has repeatedly slammed as fake news, Fox News's "Fox & Friends," MSNBC's "Morning Joe," while being the only person allowed to touch the remote control in the White House, except for technical personnel.

However, during his Asian tour, Trump had told reporters that he does not watch much TV as he is usually busy reading documents, insisting that "people with fake sources" who don't know him might claim the opposite.

The report has fetched a laugh from Twitter users, with some noting that a love for TV and diet drinks was perhaps the only things US citizens and Trump might have in common.

Ummmm shit, we may have this in common 😳

… so THAT explains it!

Some Twitter users recalled the image of former US President Barack Obama.

No one reported when BHO prayed on a rug, smoked cigarettes or met with Muslim Brotherhood staff💩💩💩💩💩

However, Trump's supporters were quick to criticize The New York Times' sources, calling it gossip.

So the New York Times actually printed an article claiming that “insiders” of the WH claim that Trump drinks 12 cans of Diet Coke a day, watches 8 hrs of cable TV, & can’t work before 9:30.

Earth to liberals, this is called gossip, not News.

While the others have decided to summarize the Trump's presidency in details.