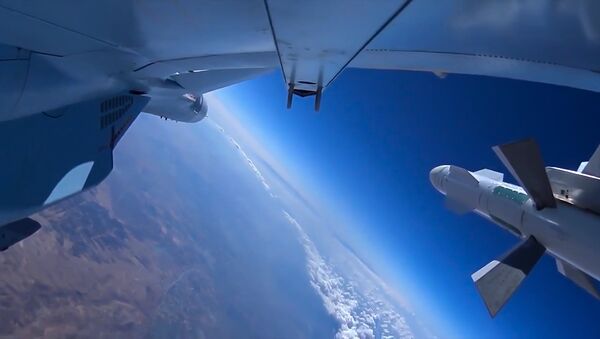 © Defence Ministry
/
Go to the photo bank
Subscribe
A remarkable video has surfaced on the Russian section of YouTube, depicting a Russian Aerospace Forces Su-30SM fighter jet as it approaches and nearly flies into the cargo hold of an Il-76 delivering humanitarian supplies to Syria.

The video, reportedly filmed during a Russian humanitarian mission over Deir Ez-zor, the eastern Syrian city recently liberated from a Daesh siege, shows a crew member of the heavy Il-76 cargo plane walking up to the plane's open rear ramp, and finding a Su-30SM slowly creeping up behind the transport aircraft until it literally just several meters away from its open cargo door.

The jet moves in close enough that the camera operator can clearly see the helmet-covered face of the pilot. Suddenly, the plane breaks away and begins a smooth nose dive away.

The jet fighter's impressive feat immediately set internet users buzzing, with commentators taking note of the pilot's impressive skills, and the Su-30SM's capabilities, given that it was operating within powerful streams of air generated by the Il-76's engines.

"Holy cripes! Even just watching this is scary," user Ian wrote in the YouTube comments section to the video. "Russia has the know-how for making the best planes and the best pilots in the world, and they have the know-how for improvising in flight. I hope the pilot doesn't get into any trouble," Alexander added. "Swagger is in pilots' blood," Evgeny wrote.

Air Force Veteran Suggests India Should Go for More Russian Su-30MKI/Su-35
Naturally, the comments section also included a few jokers: "He was checking to make sure they unloaded everything," Oleg quipped. "Daesh has been defeated; there's nothing else left to do," Ilya added. "Only the Russians can do this. Americans are pissing themselves. And how about that exit!," Vladimir joked.

More serious users also offered their two cents. Husein VOO noted that "this video speaks to the phenomenal maneuverability of Russian 4++ gen aircraft. No F-22 or F-35 (of any modification), can match these capabilities. And of course good job to the pilot as well, especially for how beautifully he flew away." Alexander wrote: "This is top notch stuff. Some little boy will see this and dream about it later. Imagine how many kids will want to become military pilots if even someone like me, an old man, have been inspired."

000000
Popular comments
That crunching sound is US military pilots eating their hearts out!!!