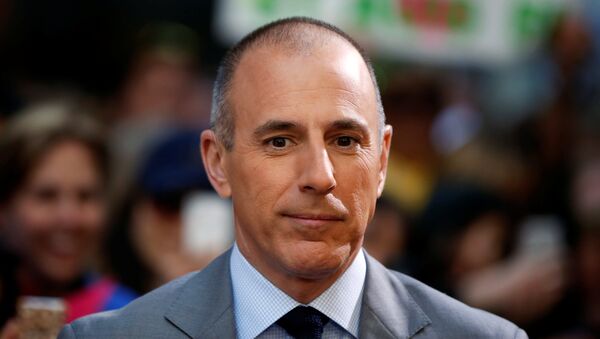 © REUTERS / Lucas Jackson
Subscribe
A day after Matt Lauer was fired by NBC for "inappropriate sexual behavior" in the workplace, the unemployed journalist issued a statement Thursday saying that he was "truly sorry" for his actions.

Cairo Launches Female-Only Bus Service in Response to Rampant Sexual Harassment
"There are no words to express my sorrow and regret for the pain I have caused others by words and actions. To the people I have hurt, I am truly sorry… as I am writing this I realize the depth of the damage and disappointment I have left behind at home and at NBC," Lauer said in a statement, before pushing back on some of the allegations. "Some of what is being said about me is untrue or mischaracterized, but there is enough truth in these stories to make me feel embarrassed and ashamed."

Lauer was fired Wednesday after a colleague filed sexual harassment claims against the 59-year-old Monday. According to an exclusive Variety report published hours after Lauer hit the chopping block, the veteran journalist went as far as exposing himself and gifting sex toys to his female colleagues.

In many cases, including that of Lauer, colleagues said that everyone knew about the sexual harassment environment going on behind the scenes in the newsroom, but ultimately feared repercussions to their careers if they spoke out.

Reflecting on the matter at hand, Christopher Chambers, a journalism professor at Georgetown University, tells Sputnik News that due to the rise in sexual harassment claims, "companies will have no choice" but to change their ways on how to better handle allegations.

"Some are taking the academia model, at least in the US based on our Title IX law, and taking it out of human resources entirely," says Chambers, adding that though it may not be the best option, some organizations may go the route of including a stipulation in contracts.

Wave of Sexual Harassment Allegations Won’t Stop Soon - Democratic Candidate
"The first step is simply hire and promote more experienced female journalists, producers, managers, editors, technicians/engineers," he said. "The next step will be to eliminate the cover that constituencies supply."

But the future of journalism is a tough one to dissect, says Chambers, especially when one considers the link it has the political realm.

"It's going to be tough to keep a watchful eye on journalism and the media/entertainment sector when the political remains rife with abuse, especially when so much of the news is tied to partisan politics as another facet of the business model."

The former "Today" anchor is the latest high-profile media figure to be accused of sexual harassment. He follows the likes of media figures such as Charlie Rose and Bill O'Reilly and politicians such as Al Franken, Roy Moore, and John Conyers.

000000
Popular comments
As the 'sex brain' is a microcosm of the greater ability to survive in the universe for the unpredictable future humans needs to treat in a manner that displays the 21st century wisdoms that are applicable to survival. As there is no acid test to prove that an individuals existence is contrary to the goal of perpetual humanity or its evolution thereafter, there are no shortcuts to providing such a state of wisdom.