Another German Grand Coalition 'Not Good For Democracy' – Political Scientist 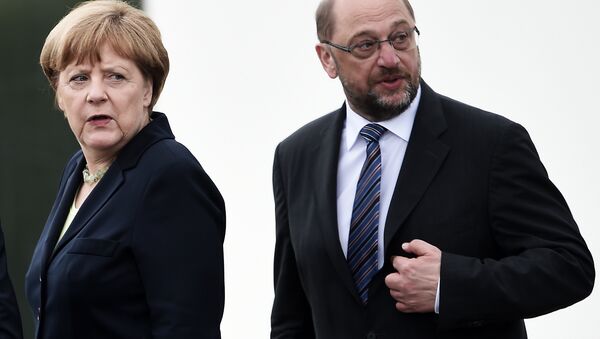 Discussions between CDU/CSU leader Angela Merkel and SPD leader Martin Schulz on forming another "grand coalition" are set to begin. However, there is "no mandate" for such an arrangement after their parties' poor election results; another solution, such as a minority government, would be more democratic, Dr. Paul Sanders told Radio Sputnik.

Angela Merkel's center-right CDU/CSU bloc and Martin Schulz's Social Democratic Party (SPD) are preparing for talks on Thursday about the possibility of forming the next German government, despite both parties losing votes in September's elections. Following the failure of the "Jamaica coalition" talks, both Merkel and Schulz had declared a preference for new elections but they have since changed their minds.

Dr. Paul Sanders, an academic expert in international affairs and associate professor at the French business school NEOMA, told Radio Sputnik that another "grand coalition" is not in the best interests of democracy, but new ways of solving Germany's political deadlock may be explored.

Sputnik: What's your take on Merkel's efforts to form a "grand coalition" with the SPD? How likely is this scenario now?

Dr. Paul Sanders: Unfortunately, I have to say that now it's very likely. I'm saying unfortunately, because it's not really good for democracy. A couple of days ago, [journalist] Jakob Augstein wrote that a minority government would actually be much better for democracy in Germany than a new edition of the "Grosse Koalition" (great/grand coalition).

Merkel Gives Up on 'Jamaica', Sets Sights on Grand Coalition With SPD
Sputnik: Last week, Merkel spoke in favor of snap elections but on Saturday she spoke against them. Why do you think she has changed her mind?

Dr. Paul Sanders: Well, it's not really her who changed her mind, but the SPD. They made it clear from the very beginning [that they wouldn't form a coalition] that's why there were "Jamaica coalition" talks between the Greens, CDU/CSU and FPD, which went on for a couple of weeks.

This was basically the first option, because the SPD made it clear that after the relatively disastrous result in the election, they basically had been more or less punished for the "grand coalition" and that it was time to go back into opposition.

They have changed their minds over the past week, it's a classic case of what we in political science call "dirty hands." You have the reason of state, or "realpolitik" on the one hand, versus the interests of the Social Democratic Party.

Sputnik: Are you saying that it's now very unlikely there's going to be a fresh vote in Germany? Is this a final decision for this mandate, then?

Dr. Paul Sanders: I would suspect so, because a new vote would be equally uncertain. They hope that this would improve the score of the SPD or the CDU/CSU, which is not necessarily guaranteed. It could be even worse, because obviously if you're on the side of the AfD, the right-wing parties, then part of your criticism of the system would be what's happened over the last couple of weeks, that the established parties have been incapable of forming a coalition. I think this would fire up the right-wing electorate because it's proved that democracy, as they say, is not working and there needs to be change.

SPD Leader on German Gov't Talks: 'No Options Off the Table'
Sputnik: How long will this political limbo, or deadlock, go on for? It's not good for Germany or Europe, is it?

Dr. Paul Sanders: Well, in a way it's good for democracy because it makes people think about having to do politics in new ways. Up until now, there's been talk about three options: a minority government, new elections or a grand coalition. Now there's even talk within the SPD, because they're trying to make it more interesting for SPD functionaries, the idea of nevertheless engaging in cooperation or collaboration with the CDU/CSU.

So there is now talk of a fourth way, in which there would be a kind of memorandum of understanding between the two parties, where they would go together on a majority of issues but they wouldn't necessarily agree on everything. This would be sort of one notch down from the constraints of a grand coalition.

Sputnik: Who could benefit from these failed coalition talks? Could there be any changes in Germany's political landscape now or in the near future?

Dr. Paul Sanders: I think that's what everybody is trying to prevent – that the political landscape changes too much. That's why I was talking about "realpolitik" earlier on, because what they're saying to the SPD is, "Look guys, you have to do something which is not necessarily in the party interests but is for the benefit of the country," because in that way you will maintain stability and then obviously they'll get four years of peace until the next election.

Now, if this were to fail, which I find a rather unlikely scenario, then of course the most likely beneficiaries would be those who have benefited most from the last election, which is the FPD, the liberals, and the AfD, the right-wing party, which went from zero to 94 seats in the parliament, which is of course absolutely unprecedented.