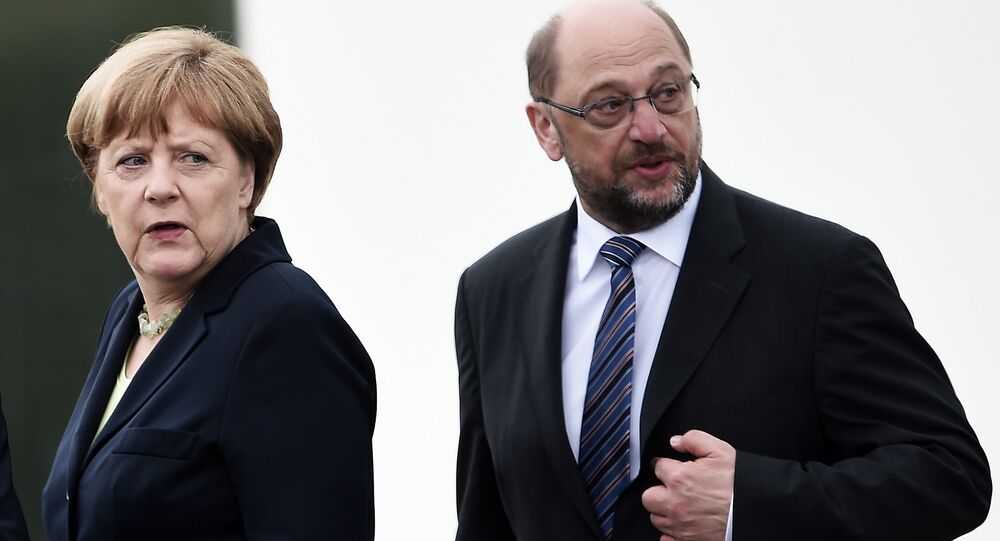 Leader of Germany's Social Democrats Martin Schulz, who has promised to drop out from a “grand coalition” with Chancellor Angela Merkel's conservatives, is under growing pressure to reconsider and put an end to the country’s political chaos, German media reported.

Schulz, whose SPD party suffered a humiliating defeat in September’s general elections, has repeatedly said it would not return as the junior coalition partner in a government led by Angela Merkel.

Meanwhile, President Frank-Walter Steinmeier, a fellow Social Democrat, has appealed to Schulz to back down arguing that this "is the moment when all participants need to reconsider their attitude."

© AFP 2021 / Odd ANDERSEN
Germany's FDP Secretary General: Talks on 'Jamaica Coalition' May Resume
The president had earlier conferred with the leaders of parties in the failed coalition talks — the pro-business FDP, the Greens and the leader of Angela Merkel’s Bavarian allies the CSU.

"With a view on Germany's ability to take action in Europe, the SPD should once again consider if it should not join a government," Oettinger, a CSU politician, told the Spiegel weekly.

However, despite Martin Schulz’s desire for a snap vote, latest polls show that an early election could give the SDP even fewer votes than the dismal 20.5 percent it garnered in September.

Some analysts believe that while a majority of SPD members are opposed to staying in a coalition with Merkel, there are voices within the party establishment arguing that throwing a lifeline to the Chancellor could be preferable to unpredictable alternatives and could even give the SPD a chance to vie for the powerful finance ministry.

Adding to this sentiment, SPD parliamentary fraction chief Andrea Nahles said on Monday that she could support a Merkel-led minority government.

According to German media reports, SPD members also doubt if  Martin Schulz is really the man fit to lead the party into a new election campaign.

"Too many mistakes during the election, missteps with new appointments and — worst of all — a misjudgment of the public's current mood," Bild wrote.

There is speculation that the SPD leader could face calls to step down at next month’s party conference if he refuses to change his stance.

Martin Schulz ruled out another “grand coalition” after his party’s worst postwar performance in federal elections in September.

He reiterated his stance after the failure of Sunday night’s talks about a three-way coalition between Angela Merkel’s Christian Democratic Union (CDU), the Free Democratic Party (FDP) and the Greens.

The FDP’s walkout from coalition talks has thrown German politics into a state of chaos, described by President Steinmeier as “a situation that the German federal republic … has never seen before.””.

Meanwhile, German media suggested that the only way out for Schulz would be to kick start coalition talks with Merkel.