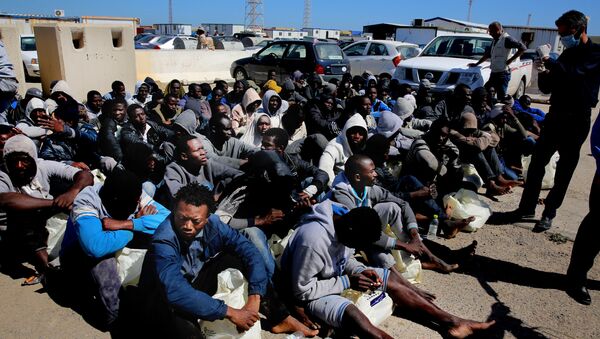 © AP Photo / Mohamed Ben Khalifa
Subscribe
Following the release of a CNN documentary that exposed the extent of slave trade in post-Gaddafi Libya, the scandal is gaining momentum in the international community, which has called upon Tripoli to take action against human traffickers. Sputnik Arabic spoke with the head of the Libyan Human Rights Observatory, Naser al Hawari, about this issue.

CNN journalists went undercover to a slave auction and exposed the grim world of slave traders, who operate in Libya’s capital, Tripoli, selling people for as little as $400.

The revelations shed light on the realities of post-Gaddafi Libya, where the political weakness of the local government, economic stagnation and the presence of illegal armed groups have put migrants, who come predominantly from western and central Africa, in grave danger.

The head of the Libyan Human Rights Observatory, Naser al Hawari, told Sputnik Arabic that "the topic of the slave trade in Libya was raised a long time ago, but now CNN managed to shoot the camp for refugees from within.”

Libya in 2017 Is Home to the Slave Trade... Yes, You Read That Right
He further said that the journalists claimed to have contacted the Libyan government a few months ago to gain access to these camps. However, the government did not give an official statement on this matter. “Although recently they called for an investigation, they did it with delay,” the head added.

Al Hawari also noted that "some smugglers who were trafficking people in Libya are in parallel controlled by factions that are responsible for security in the Libyan capital of Tripoli. These are well-armed formations that feel very confident in Libya. "

He called on the Libyan government to take measures to stop this practice, but expressed doubt that the Government of National Unity would take the necessary steps to counteract these groups and expel them from Tripoli.

“It has no opportunity to force them to lay down their arms and leave the city. Only the Libyan Army, the only legitimate force in the territory of Libya, can carry out such an operation. However, there are strained relations between the eastern and western governments,” al Hawari said.

Rights Lawyers Submit Report on Alleged War Crimes by Libya's Haftar to ICC
After its release, the report sent major shockwaves around the world, prompting the international community to call for urgent action against the traders and pressing the Libyan government to double down on its efforts to combat the rampant human trafficking that has plagued the country ever since the Arab Spring.

In a public statement, UN Secretary General António Guterres expressed his shock at the extent of the slave trade in Libya and declared that “slavery and other such egregious abuses of human rights have no place in the 21st century.”

“In recent days we have all been horrified by images of African migrants being sold as ‘goods’ in Libya.”

“It is our collective responsibility to stop these crimes,” the secretary general added.

The Libyan government fired back by arguing that it cannot solve the global problem alone and other countries should come to its aid in resolving the crisis. However, Tripoli caved in to public pressure and announced that it would open an investigation into “these inhuman acts.”