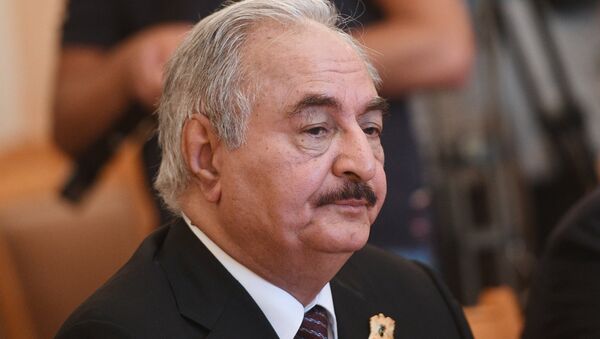 "Investigative Report filed with the Office of the Prosecutor of the International Criminal Court by Guernica 37 IJC and its international partners, concerning allegations of War Crimes and Crimes Against Humanity committed by forces under the command of Field Marshal Khalifa Belqasim Haftar (Haftar) of Libya," Guernica 37 IJC said in a statement.

Murder, torture or inhuman treatment, willfully causing suffering, extensive destruction and appropriation of property, and persecution are among the allegations brought against Haftar by the group.

The human rights activists believe that hundreds if not thousands of civilians have become victims of Haftar and his troops.

Guernica 37 IJC claims to posses witness statements and videos that prove Haftar's involvement in murder, torture and looting of property.

Report Reveals Shocking Male Rape Practices in Disintegrated Libya
Libya has been in turmoil since the 2011 civil war that resulted in the overthrow of country’s longtime leader Muammar Gaddafi. The eastern part of the crisis-torn state is governed by a parliament with headquarters in the city of Tobruk. The parliament is backed by the Libyan National Army headed by Haftar.

In July, the United Nations called on the Libyan National Amy (LNA) to probe the alleged involvement of the special forces, a unit aligned with the LNA, in torturing and executing detainees. According to the Office of the United Nations High Commissioner for Human Rights (OHCHR), there have been videos circulating around social media which allegedly show LNA commander Mahmoud Werfalli's troops executing kneeling men, or giving the order to have them shot. Haftar, in his turn, promised to investigate all the allegations of the war crimes, but has not shared any results of the investigation so far.