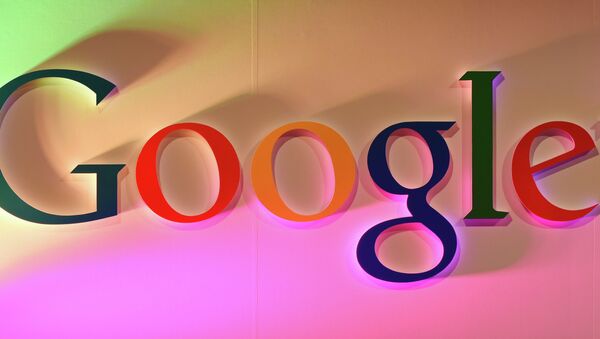 Google will create new algorithms to derank Sputnik News and RT content from appearing on its Google News service. Speaking to Sputnik, Jim Jatras, former US diplomat and foreign policy adviser to Senate Republicans, said this issue isn't even so much about Sputnik and RT as it is about Americans' freedom of access to information.

Google's Erich Schmidt announced that the search engine giant has plans to engineer algorithms to detect and derank Russian foreign language media content at a question and answer session at a security forum in Canada. RT and Sputnik editor-in-chief Margarita Simonyan spoke out against the move, saying it "defied all logic and reason," and adding that the US Congress has found no evidence of any policy violations by Russian media in any of its investigations. Russia's media watchdog Roskomnadzor also vowed to defend Russian media any way it can.

Jim Jatras: "I don't know how many people had a chance to watch the hearing where the representatives from Google, Facebook and Twitter were grilled by senators, who placed the blame on them for not policing this nonexistent propaganda. The executives were clearly scared; they were threatened by senators, essentially as gatekeepers and filters. This is not even so much a free speech issue as a freedom of information issue for the American public.

Sputnik: What do you think are Google's underlying motives are with this initiative?

Jim Jatras: The reason Google's doing this is that they have a tremendous amount of business with the US government.

Sputnik: Why would they be held responsible to begin with? They're a private corporation. It's not their responsibility to handle public policy, if that's what this is supposed to be.

Jim Jatras: They were trying to answer reasonably, the best they could, to very unreasonable questions. These senators have got it in their minds that it is their job. That's the reality here, not whether any rational person would say that it's the job of [an online media company] to manage the content that people freely use.

'Because Russia': RT Editor-in-Chief Slams Google Over Its 'De-rank' Algorithms
Sputnik: Could it have anything to do with the senators' possible lack of understanding about how the internet works?

Jim Jatras: I don't think so at all…I think they know what's going on – it's the whole anti-Russia thing, which is kind of the modern-day version of the 16th and 17th century witch craze, except that nobody's getting burned or hanged yet.

I don't know that they will ban RT or Sputnik or anything else, but what they will do is to make sure not only that those sources get buried, but that information carrying similar results will also get buried. This will constitute an attack on the alternative media in the United States.

Sputnik: Do you think this is a dangerous precedent for press freedoms in the United States?

Jim Jatras: I think it's the beginning of a phenomenon that's going to get a lot worse. My concern as an American is not so much the press freedom; I don't know that a foreign government, whether it's the Russians or the Americans or the Germans or anybody else has a freedom or right per say to bring its content to another country, but I believe as an American that I have the right to get information. That's what they're trying to prevent. They're not so much trying to do this to hurt RT or hurt the Russian government; they're doing it to try to 'protect' the virgin ears and eyes and brains of the American public.

Sputnik: Do you think Twitter and Facebook could come up with similar measures or perhaps go beyond?

Jim Jatras: That's what worries me. I'm sure there are very sophisticated ways to flag content from various sources. Again, we're already seeing this with Twitter taking down the verified accounts of people who say things that Twitter evidently doesn't like, and you don't even know what it is that they don't like. I think that's the direction that this is going to go, where there will be a very sophisticated and very subtle filtering of content in ways that users aren't even aware of, in order to maintain a kind of pseudo-reality in the information world.

Daily Beast Reports Sputnik Registers as Foreign Agent - Except it Hasn’t
Sputnik: Is it fair to say that all of this related to the so-called Russia investigation that's been dragging on for close to a year now?

Jim Jatras: It's a total fiction, a witch-hunt, but not just about even the failure of that [investigation]. I think in a lot of ways what's behind it is that during Trump's campaign, he wanted to improve ties with Moscow, and there are an awful lot of people in our establishment who want to make sure that that can never ever happen…

[Trump] keeps coming back to the Russia thing; I think he's sincere about that, but I also think he's kind of boxed in. Sometimes I think that inside President Trump is a tiny little Candidate Trump fighting to get out. It's not working so far, and part of it is his own fault. He's certainly picked a lot of the wrong people to run his national security team. I don't know to what extent he was boxed in even to that extent.

Sputnik: We have Google, the investigation, anti-Russian policy popping up not only in the US, but also in Europe. Where can things go from here?

Jim Jatras: I don't know where we go from here, but my guess is 'no place good'. You are seeing such a demonization –for example the whole name and shame [campaign against people] who appear on RT to basically suggest that they are disloyal; [they are] basically being singled out as presumptive traitors for thinking we could have a better relationship with Moscow…

You Don't Say: FBI, Justice Dept Unable to Verify Trump-Russia Dossier
We really didn't see this to this extent [even] during the Cold War. During the Cold War, especially on the left, you did have a lot of strong voices calling for better relations with the Soviet Union, maybe some of them because they were ideologically sympathetic to communism.

What is happening today is that there is a much greater stigma to wanting better relations with Russia, that isn't communist anymore, and so much of it is actually coming from the progressive side. Now maybe that's because they really, really hate Donald Trump, so there's a partisan element to it. But basically what we have is the Left in the United States or at least the center-left and the establishment left and the neoconservatives in the Republican Party walking in total lockstep in wanting to shut [Russian media] down. And you only have the outliers, like a Dennis Kucinich on the left or some of the people on the right, like Infowars, that are against this. It really is a marginalization of dissenting opinion.