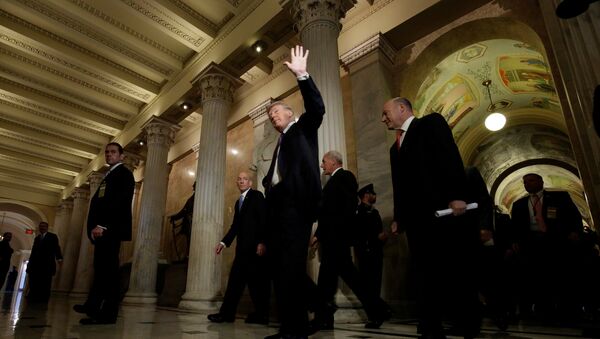 © REUTERS / Aaron P. Bernstein
Subscribe
Having spent over a year pouring over the document known as the ‘Trump Dossier’, the US government investigators predictably can't find a shred of truth in it.

The US Justice Department and FBI seem to have failed to verify the so-called 'Trump Dossier' which allegedly details the US president’s ties to Russia, according to the Washington Examiner.

The US House Intelligence Committee subpoenaed the FBI and US Justice Department on August 24 this year demanding "any documents, if they exist, that memorialize DOJ and/or FBI efforts to corroborate, validate, or evaluate information provided by Mr. Steele and/or sub-sources and/or contained in the 'Trump Dossier.'"

Trump Calls 'Crooked' Hillary Clinton 'Worst and Biggest Loser of all Time'
However, neither of the agencies has provided documents in response to this subpoena, the newspaper reports, citing sources familiar with the matter.

The 'dossier' is a 35-page document penned by former British spy Christopher Steele, who was hired by a Washington-based company called Fusion GPS. It was published by BuzzFeed in January and contains an assortment of unsubstantiated claims about Trump participating in activities that could make him vulnerable to Russian blackmail.

"There have been many questions surrounding the dossier. Who paid for it? Who were its sources? Did the FBI use it as a basis to request a secret court's authorization to spy on Americans? But the most important question about the dossier is the most basic one: Is it true?" the Washington Examiner inquired.

This development comes after Congressman Adam Schiff told the Wall Street Journal on Wednesday that most of findings in the dossier turned out to be true.

Russia has repeatedly refuted allegations that it meddled in the 2016 US election, calling them "absolutely groundless" and noting that Moscow never had contacts with the Trump campaign team.

000000
Popular comments
That was never hard to figure out....this is nothing but a distraction....the creatures in the swamp are still there...lol...
Mayhem
20 November 2017, 13:15 GMT2
000000
"This development comes after Congressman Adam Schiff told the Wall Street Journal on Wednesday that most of findings in the dossier turned out to be true." This Adam Schiff seems to have weird intelligence - in his head.
mzungu in Africa
20 November 2017, 14:21 GMT
000000
Newsfeed
0
New firstOld first
loader
LIVE
Заголовок открываемого материала
Access to the chat has been blocked for violating the rules . You will be able to participate again through:∞. If you do not agree with the blocking, please use the feedback form
The discussion is closed. You can participate in the discussion within 24 hours after the publication of the article.
To participate in the discussion
log in or register
loader
Chats
Заголовок открываемого материала
Worldwide
InternationalEnglishEnglishMundoEspañolSpanish
Europe
DeutschlandDeutschGermanFranceFrançaisFrenchΕλλάδαΕλληνικάGreekItaliaItalianoItalianČeská republikaČeštinaCzechPolskaPolskiPolishСрбиjаСрпскиSerbianLatvijaLatviešuLatvianLietuvaLietuviųLithuanianMoldovaMoldoveneascăMoldavianБеларусьБеларускiBelarusian
Transcaucasia
ԱրմենիաՀայերենArmenianАҧсныАҧсышәалаAbkhazХуссар ИрыстонИронауОssetianსაქართველოქართულიGeorgianAzərbaycanАzərbaycancaAzerbaijani
Middle East
Sputnik عربيArabicArabicTürkiyeTürkçeTurkishSputnik ایرانPersianPersianSputnik افغانستانDariDari
Central Asia
ҚазақстанҚазақ тіліKazakhКыргызстанКыргызчаKyrgyzOʻzbekistonЎзбекчаUzbekТоҷикистонТоҷикӣTajik
East & Southeast Asia
Việt NamTiếng ViệtVietnamese日本日本語Japanese中国中文Chinese
South America
BrasilPortuguêsPortuguese
NewsfeedBreaking
04:12 GMTElon Musk Warns About Lots of 'Accounting Trickery' in Biden’s Build Back Better
03:43 GMTPro-Choice Coalition Unveils Plan to Expand Abortion Access in California
03:42 GMTHouse Dem Leaders Mulling Response to Boebert-Omar Feud as 'Squad' Wants Blood - Report
03:37 GMT‘Let’s Go Brandon’ Boat-Winner Disqualified From Competition For ‘Overt Political Message’ - Report
02:45 GMTGOP Lawmaker Urges Going ‘Beyond Political Labels’ to Address Border Crisis, Suggests His Own Plan
01:53 GMTPence Goes to New Hampshire to Support GOP, Stirring up Rumors of Running in 2024 - Report
01:02 GMTHouthis Claim ‘Major Collapse’ of Coalition Forces Defending Ma’rib, Predict City’s Capture in Days
00:36 GMTUS House Passes Bill to Ban Imports From China's Xinjiang
00:35 GMTMutations May Make COVID-19 Boosters as Routine as Flu Shots - Report
00:14 GMTTrump Ex-Chief of Staff Facing Contempt Charge Sues US House Speaker Pelosi - Reports
00:10 GMT'Serial Liar': Jussie Smollett Accused of Lying Under Oath as Jury Ends First Day of Deliberations
YesterdayTaiwan Urgently Needs to Develop Asymmetric Defense Capabilities to Deter China, Pentagon Says
YesterdayWatch: Hillary Clinton Weeps as She Reads Her 2016 Victory Speech That Never Happened
YesterdayOmicron Strain to Hinder World Economy Revival, WTO Director-General Says
YesterdayMBS’ Pre-GCC Summit Tour Takes Him to Doha for First Time Since Lifting Qatar Boycott
YesterdayCould Aggressive US Rhetoric Against Russia Be the Result of Biden's Poor Standing at Home?
YesterdayArizona's Ducey Calls in National Guard to Border, Urges Biden to 'Do Anything' With Migrant Crisis
YesterdayVirginia Library Removes Holiday Display Featuring 'Gender Queer' & 'Lawn Boy' Next to the Bible
YesterdayWhite House Unaware of Reports That Ex-President Bush Was Victim of Havana Syndrome
YesterdayInstagram CEO Testifies in US Senate on Potential Harm to Teenagers