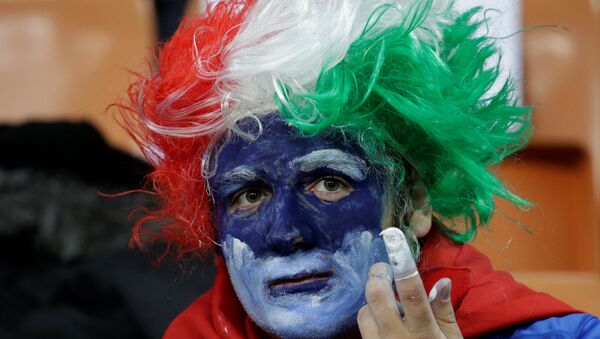 © REUTERS / Max Rossi
Subscribe
For the first time in 60 years Italy will not be taking part in the 2018 World Cup football finals in Russia.

Italy has failed to qualify for the 2018 World Cup — the first time the country has not reached the final stages of the soccer tournament since 1958 — and only the second time in their history.

The four-time World Cup winners had to win but failed before a sell-out crowd at the San Siro stadium in Milan on Monday, November 13, against Sweden to book a place in the final.

Instead a Swedish shut-out sent the Scandinavians through to the final stages, having previously won 1-0 at home, to test their ability against the world's leading sides when the tournament kicks off next June.

Playing in front of 70,000 fans, Italy were the dominant side, but they could not overturn Sweden's first-leg advantage.

Sweden coach Janne Andersson admitted his team needed to battle all the way.

"We had no weapons left. We just had to sit there and hope we could hang on. We couldn't do it in any other way, they are so skillful," Andersson said.

As they celebrated their victory, the Swedish players destroyed the pitch-side desk of broadcaster Eurosport.

The goalless draw left the Italian players in tears at the end — and at the mercy of the country's media who immediately stuck the boot in describing the outcome as an "apocalypse."

The defeat heralds the end of the international career of goalkeeper Gianluigi Buffon, the most capped player in Italian history with 175 appearances for his country.

"It's a shame my last official game coincided with the failure to qualify for the World Cup. Blame is shared equally between everyone. There can't be scapegoats," said the 39-year-old player.

"I'm sorry. Not for me, but for Italy. We blew something that could have meant so much. The only regret is that it ended like this," he added.

"I cried a few tears. We have many heroes."
🇸🇪Sweden's coach and players react to their #WorldCup play-off win over Italy 🏆🙌
👉 https://t.co/Ovu1QRv5sv pic.twitter.com/pqPbrw3x78

Buffon's Juventus teammate Andrea Barzagli and Roma's Daniele De Rossi have also announced their international retirements, while Juventus player Giorgio Chiellini is also expected to hang up his boots on the national stage.

Zinedine Zidane, Legendary Footballer and Coach, Confesses His Love of Russia
Speaking after the game, Barzagli, 36, said it was painful, adding: "I don't know what we missed. All I know is we're out of the World Cup. It's a unique disappointment. The era of four or five veterans comes to a close, the one of the hungry young players coming through begins and that's how it should be."

Failure to qualify has heaped pressure on Italy boss Gian Piero Ventura, with the sport daily Corriere dello Sport calling for him to step down, while the headline in La Gazzetta dello Sport read "Italy, this is the apocalypse."

It continued: "We will not be with you and you will not be with us. A love so great must be reserved for other things. There will be inevitable consequences but let's just see if they stop with Ventura or go further."

Ventura, 69, is under contract until 2020. After the match, he said: "I have not resigned because I haven't spoken to the president yet. Resignation? I have to evaluate an infinity of issues. We will meet with the federation and discuss it.'

000000
Popular comments
this trend will probably continue, as in the Serie A you can hardly find an Italian playing.