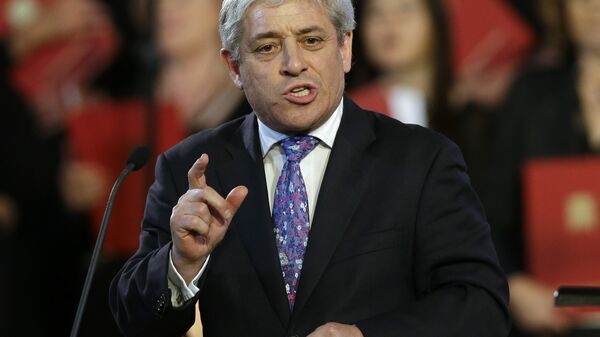 According to Commons Speaker John Bercow, the US president has not earned the right to speak to the UK Houses of Parliament, an honor that was granted to the latter’s predecessor.

Following a January invitation to US President Donald Trump by UK Prime Minister Theresa May to visit the island nation, meet its dignitaries and speak to its august institutions, many of England's top officials — including the Queen — have vocally refuted the offer, and most recently, the Parliament has added its voice to the ever-growing chorus of ‘nope!' to the possibility of a visit from the unpopular American leader.

Bercow asserted that Trump does not deserve the honor of speaking to MPs and peers in Parliament's historic Westminster Hall, according to the Independent.

"An address to both Houses of Parliament is not an automatic right, it is an earned honor," Bercow said at London's Mile End Institute recently.

"My view is that he has not earned that honor," the top lawmaker said.

"An invitation to address both Houses of Parliament is not a bauble to be handed out by the prime minister of the day," suggested Bercow, in reference to May's gushing invitation to the strikingly unpopular US president.

Inviting a person to speak at Parliament "is not a government prerogative — that is a matter for the speakers of the two Houses," Bercow added, cited by the Independent.

Bercow noted that his decision was partially based on the ongoing "huge controversy" surrounding Trump, and particularly the US president's extremely unpopular immigrant ban policies.

While no date for a Trump visit to the UK has been announced, the White House has repeatedly asserted that the jaunt will happen, although whether the president will be permitted to meet Queen Elizabeth II remains a source of continuing debate.