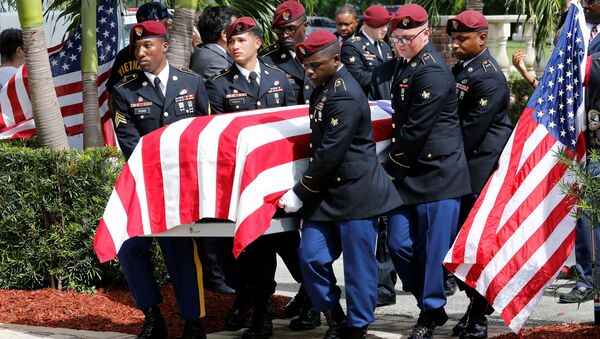 © REUTERS / Joe Skipper
Subscribe
International
India
Africa
The Pentagon has told the families of the four US soldiers killed in Niger that they’ll have to wait until at least January for the investigation into the deaths of their sons, fathers and brothers to conclude.

The four US soldiers were killed alongside four Nigerien troops at the beginning of October on the border between Niger and Mali. They were among a patrol of 30 Nigerien soldiers being accompanied and advised by 12 Americans.

The Pentagon's prime suspect is a new branch of Daesh that has just begun to operate in Mali, which has been waging a war against Islamic militants since 2012.

The Pentagon released a Wednesday statement regarding the ambush, claiming that the families of the killed soldiers shouldn't expect a full report on the circumstances of the deaths until January at the earliest.

An Army investigation team led by US Africa Command (AFRICOM) Chief of Staff Maj. Gen. Roger Cloutier has been deployed to the scene of the ambush to gather information. Cloutier will also travel to the US and Europe over the course of his investigation.

"Once the investigation is completed, briefing the families of the fallen will be the department's first priority," the Pentagon said in their statement. They added that they're "committed to a thorough and detailed investigation" into the deaths of the four soldiers.

Over a month after the October 4 ambush, a more complete picture of what transpired has begun to emerge — but many details remain contradictory or unconfirmed. For instance, one of the killed soldiers, Sgt. La David Johnson, was separated from the rest of the squad during the battle and was found dead almost two days later.

The Pentagon has not officially explained why this was the case. But Sgt. Abdou Kané, a Nigerien soldier who was injured during the ambush, told the Washington Post that part of the American force was separated from the main body during the fighting, which would explain how Johnson ended up miles from the site of the attack.

Kané also contradicted the Pentagon's previous claim that the US troops were accompanying the Nigeriens for a simple reconnaissance mission with a low risk of enemy engagement. "The mission was to go to Mali to capture the terrorists and bring them back," Kané said — and if his statement is accurate, then the Americans were violating the rules of engagement.

"We owe the families as much information as we can find out about what happened, and we owe the American people an explanation of what their men and women were doing at this particular time," said Chairman of the Joint Chiefs of Staff Gen. Joseph Dunford during a press conference on October 23. "The only thing I'm asking for today is a bit of patience to make sure what we provide to you, when we provide it, is factual."