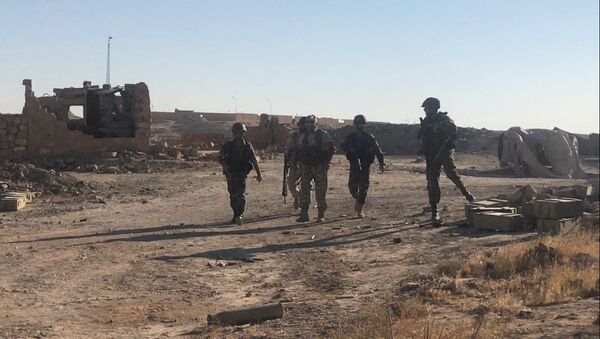 The Russian Defense Minister has spoken about the success of the Moscow's military operation in Syria.

"Today, Daesh controls less than 5%. Before the start of the operation of the Russian Air and Space Forces, more than 70% of the territory of Syria was under Daesh control," Russian Defense Minister Sergey Shoigu said at a meeting of defense ministers of ASEAN member countries and dialogue partners.

He underlined that Moscow is focused on restoration of a peaceful life in the country.

"998 cities and settlements have been liberated, the liberated area is 503 thousand 223 square kilometers. Most of the militants were eliminated. The process of restoring a peaceful life in the country has begun. Since the beginning of the operation of the Russian Air Force, since 2015, 1.12 million people have returned to their homes. Only in 2017 — 660 thousand," Shoigu said.

"We pay special attention to solving humanitarian issues in Syria. We have done good work on defusing explosive objects. A total of 96,105 explosive objects have been defused since the work started – an average of 1,500 explosive objects per 24 hours. We are also training Syrian sappers. As of now, 621 sappers have already started working," Shoigu said.

The Russian minister also called on the ASEAN members, as well as the bloc’s dialogue partners to participate in the humanitarian and reconstruction efforts in Syria.

"I would like to call on the ASEAN countries and their dialogue partners to join the humanitarian and reconstruction mission in this country. We are ready to provide any kind of assistance," Shoigu stressed.

The minister added that Syria was in dire need of humanitarian assistance.

The minister mentioned the crucial role of oil sales reduction in the success of the military operation.

"Before 2015 Daesh earned around $3 billion a year from oil sales in Syria, up to $10 million a day in separate periods. Today Daesh financial support from the Syrian territory has almost ceased," Shoigu said.

In late September, the Syrian Gas Company representative in Deir ez-Zor, Amin Hamid, told Sputnik about the oil and gas facilities Daesh militants managed to gain control of. According to him, Daesh had captured 80 percent of oil fields and most gas deposits in the Syrian province of Deir ez-Zor in 2014.

The Shoigu's statement comes after his October 16 announcement regarding the possible near termination of the Russian military campaign in Syria.

Russia, together with other countries and humanitarian organizations, has been taking numerous measures to settle the Syrian crisis which turned violent since the 2011 Arab Spring protests. Moscow's efforts aimed to help the country included humanitarian aid to Syrians and contributing to the restoration of the country.

"We are concerned over the terrorist threat increase in Southeast Asia, primarily in the context of movements of foreign Daesh terrorists who are being squeezed out of Syria and Iraq," Shoigu said.

According to the minister, cash flows into the countries of the Asia-Pacific region to support local terrorist cells and to carry out terrorist attacks are being detected increasingly frequently.

"Today our task is to conclusively destroy the potential of international terrorism, primarily Daesh, with joint efforts of the international community," Shoigu added.

He named a disproportionate increase in military potential in the Asia-Pacific region as one of the key factors affecting the security in the region, 'including the persisting policy of deployment of the Asia-Pacific segment of the US global missile defense system'.