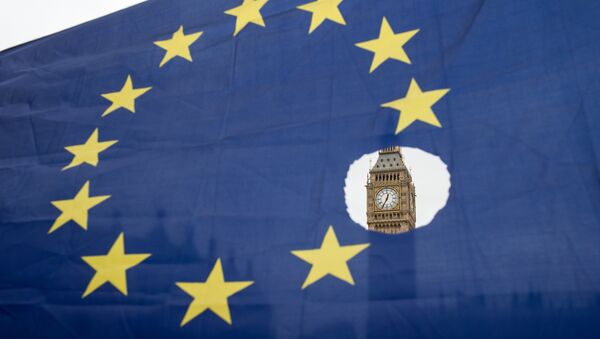 © AFP 2022 / OLI SCARFF
Subscribe
EU's Brexit negotiator has suggested using CETA as an example for trade relations with the UK after its exit from the bloc.

MOSCOW (Sputnik) — The future trade deal between the European Union and the United Kingdom may resemble the one Brussels has with Canada, but it may take several years to work out all the details, Michel Barnier, a Brexit negotiator for the European Union, has said in an interview with several European newspapers.

"From the moment the UK told us that it wants out of the single market and the customs union, we will have to work on a model that is closer to the agreement signed with Canada," Barnier said in his Monday interview as quoted by The Guardian newspaper.

The Comprehensive Economic and Trade Agreement (CETA) between the European Union and Canada, mentioned by Barnier, was signed by Ottawa and Brussels in October 2016. It wiped out most of the tariffs to expand trade turnover. The deal has been widely criticized for undermining environmental protection, health and safety regulations and workers' rights.

READ MORE: Brexit 'Divorce Bill': What UK Could Have Spent That $47 Billion On

The Brexit negotiator added that it might take several years to negotiate a trade deal.

"If we reach an agreement on the orderly withdrawal of the United Kingdom, such a [transition] period, both short and framed, is possible…To my mind, it makes sense that it covers the financial period, so until 2020. It would leave us more time to prepare for the future relationship," Barnier was quoted as saying.

Brexit is set to take place on March 29, 2019, two years after launching the departure process. London and Brussels have been negotiating conditions for the United Kingdom's exit since June. The cost of the country's exit from the EU still remains a stumbling block in the talks. Reports claim May had privately agreed to pay $47 billion.

Though Angela Merkel, one of the most influential figures in the union, expressed hope and positive attitude to the issue, she demanded more clarified proposals from Theresa May.

UK Secretary of State for International Trade Liam Fox also shared the positive approach to the deal, underlining, however, that United Kingdom's national interests should prevail in the talks.