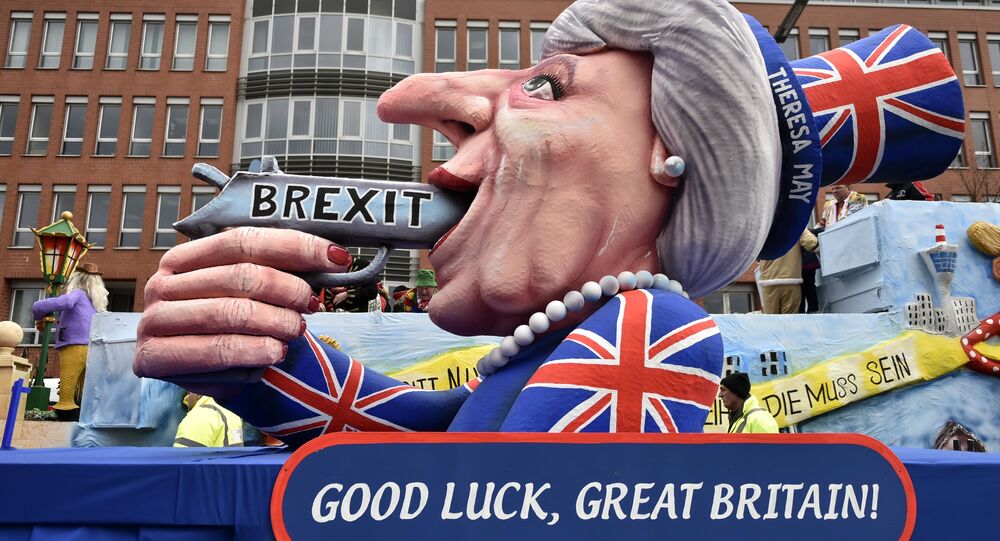 Brexit 'Divorce Bill': What UK Could Have Spent That $47 Billion On

Britain is haggling over how much it should pay to the European Union as its final settlement when it leaves in March 2019. Sputnik looks at the price of "freedom" and what UK taxpayers could have done with that money.

On Friday, October 20, it was reported that Theresa May had agreed in private to cough up 40 million euros ($47 billion), twice what she had originally promised in her Florence speech.

May said to be making another concession taking Brexit "bill" to 40 billion!
Theresa the appeaser strikes again. Dugh!

The "divorce bill" has been one of the main sticking points during the Brexit negotiations, but May has reportedly caved in on the price in a bid to move the talks forward and get onto discussions over trade.

But if a future UK government decided to scrap Brexit what could they spend that £35.7 billion (US$47 billion) on instead?

During the Brexit referendum campaign, the Vote Leave side frequently declared the EU was costing Britain £350 million (US$461 million) a week.

"That's enough to build a new NHS hospital every week of the year," they claimed.

We DO send £350 million every week to the EU. We should spend this money on our priorities like the NHS #ITVEURef pic.twitter.com/iSkbtg9bxU

The Remain side pointed out that not only was the EU not costing us £350 million a week, but a new NHS hospital cost a great deal more than £350 million.

In fact, the rebuilding of Bart's Hospital in central London cost £1.1 billion (US$1.45 billion).

But if we said a new hospital costs roughly £1 billion (US$1.3 billion) then by shelving Brexit, Britain could spend that same money on 35 new hospitals.

Pay for Most of HS2 or Crossrail 2

Parliament finally approved High-Speed 2 (HS2) — a brand new rail network between London, Birmingham and the North — in February this year.

​The two-phased project is due to be completed in 2033 and will involve 350 miles of new track, the biggest new rail project in the UK for more than a century.

If the Brexit "divorce bill" was avoided, that money would pay for 60 percent of the cost of HS2.

It would also more than pay the £31 billion (US$40 billion) cost of Crossrail 2, the proposed new north-south rail link under London.

© Photo : Pixabay
There Will Be More Homeless People in Britain Than Ever Before... Here's Why
The sum spent on the Brexit "divorce bill" — £35.7 billion (US$47 billion) — would pay the annual cost of 5.2 million state pensions or jobseeker's allowances for 10.7 million people for a year, according to Department for Work and Pensions forecasts for 2015/16.

The Joseph Rowntree Foundation estimated child poverty could be virtually erased by spending £15 billion (US$19.7 billion) and went on to say that child poverty ends up costing Britain £29 billion (US$38.2 billion) in terms of social services, extra health spending or remedial educational measures for children with a difficult upbringing.

The money spent on the Brexit "divorce bill" could virtually solve Britain's housing crisis in one fell swoop.

© CC0 / Pixabay
A Bubble About to Burst? UK Households Among the Most Indebted in the World

The same money would also more than solve the homelessness problem, in fact it would pay for successful interventions for 2.5 million rough sleepers (there are only 5,000 rough sleepers in the whole country).

The Brexit "divorce bill" could be a drop in the ocean (no pun intended) compared with the cost of replacing Trident nuclear missiles and the submarines which carry them.

The Campaign for Nuclear Disarmament say the total cost is likely to be in the region of £205 billion (US$270 billion).

© AFP 2021 / Niklas Halle'n
A protester shouts holding a placard as she marches in central London on February 27, 2016 in demonstration against a proposed renewal of Britain's Trident nuclear weapon system.

The government's own estimates are, predictably, more conservative.

In 2015, a National Security Strategy and Strategic Defence and Security Review said the four new Trident submarines would cost £31 billion (US$40 billion), but earmarked £10 billion (US$13,2 billion) to cover overspends.