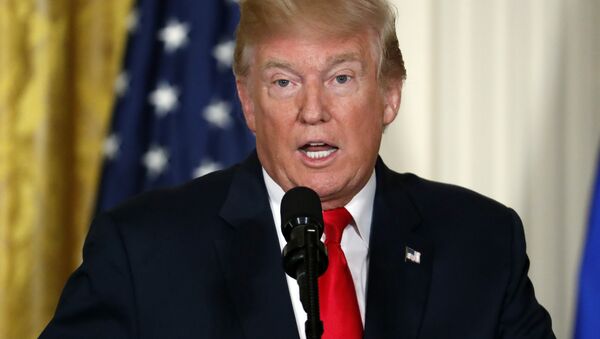 © AP Photo / Alex Brandon
Subscribe
International
India
Africa
Raqqa, which had been under the control of terrorists since 2014, was liberated on Friday by the Kurdish-led Syrian Democratic Forces.

MOSCOW (Sputnik) — US President Donald Trump said in a statement he was "pleased to announce" that the Syrian Democratic Forces, predominantly Kurdish forces supported by the US-led coalition, had "successfully recaptured" the city.

He also said that the liberation of Raqqa was a critical breakthrough in the campaign against Daesh, adding that "the end of the ISIS [Daesh] caliphate is in sight."

Liberation of Raqqa a Puppet Show Allowing US to Extend Influence in the Region
"We will soon transition into a new phase in which we will support local security forces, de-escalate violence across Syria, and advance the conditions for lasting peace, so that the terrorists cannot return to threaten our collective security again," Trump stated, adding that the United States and its allies would support diplomatic negotiations to end the violence and allow refugees to return home safely, as well as to "yield a political transition that honors the will of the Syrian people."

President Trump issues statement on Syrian forces recapturing Raqqa from ISIS. “The end of the ISIS caliphate is in sight.” pic.twitter.com/nOzQSsqfQB

The leaders of the terrorists, as well as anyone who supports them, "must and will face justice," Trump concluded.

The US-led coalition confirmed that Raqqa had been liberated from Daesh and congratulated the Syrian Democratic Forces with a victory over terrorist group. The battle for the city has lasted for months.